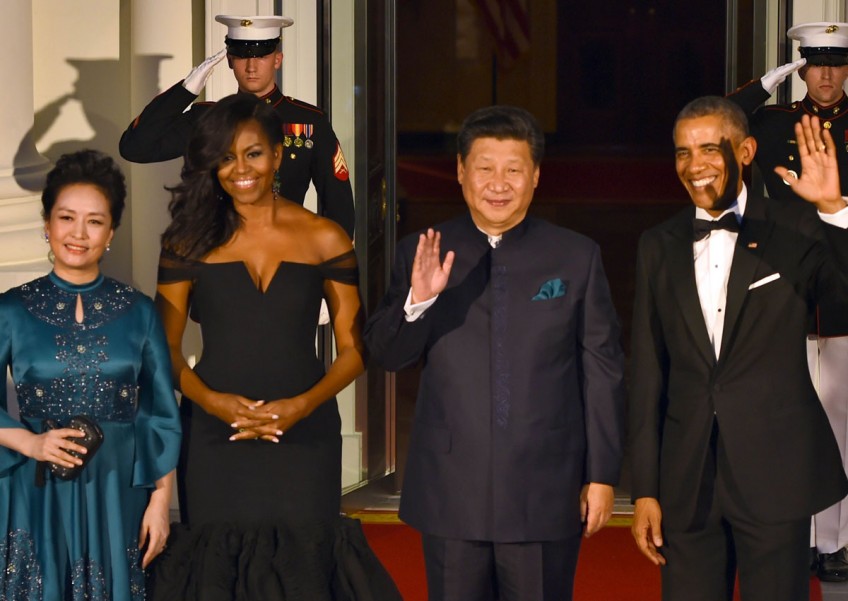 United States President Barack Obama and Chinese President Xi Jinping hailed progress in areas like climate change and cyber security, but tension between the two sides remained palpable as the Chinese leader wrapped up his first state visit to the US capital.

The pomp and pageantry of the day - Mr Xi was given an elaborate welcome ceremony with a 21-gun salute at the White House and a lavish state dinner - failed to conceal the fact that large gulfs remain between the two sides on a wide range of issues.

Addressing the press side by side in the White House's Rose Garden on an overcast afternoon on Friday, both leaders pledged to co-operate but also pulled few punches when it came to points of contention.

The modest agreement on cyber security perhaps best encapsulated the mood of the visit.

Though there had been talk of a possible cyber "arms deal" coming out of the meeting, what turned out eventually was a far more modest, non-binding agreement that neither side will conduct or knowingly support cybertheft of intellectual property.

They also agreed to set up a high-level dialogue on the matter.

Mr Obama called this "significant progress", but made it clear that the sanctions against Chinese entities which he raised weeks ago were not off the table.

"What I have said to President Xi and what I say to the American people is the question... Are words followed by actions?

"And we will be watching carefully to make an assessment as to whether progress has been made in this area," he said.

"We did not, at our level, have specific discussions of specific cases. But I did indicate to President Xi that we will apply those and whatever other tools we have in our toolkit to go after cyber criminals, either retrospectively or prospectively."

Mr Xi, in turn, stressed the potential for co-operation but also made a point that the cyber issue should not be politicised.

He said in Mandarin: "Our two sides should co-operate because co-operation will benefit both, and confrontation will lead to losses on both sides... We have broad, common interest in the cyber field. But we need to strengthen co-operation and avoid (anything) leading to confrontation. And nor should we politicise this issue."

Cyber security has been a thorn in US-China diplomatic ties for years, with the problem growing more urgent this year after the US accused China-based hackers of a breach that involved millions of personal files of American federal employees.

There was also no apparent narrowing of differences on the South China Sea issue or human rights, with both leaders standing firm on their respective positions.

Mr Obama said he conveyed US concerns about Chinese land reclamation and militarisation in disputed areas, and affirmed US support for fundamental freedoms.

Mr Xi, meanwhile, did say China does not intend to pursue militarisation in the Nansha/Spratly islands, but stressed that Beijing has the right to "uphold (its) own territorial sovereignty, and lawful and legitimate maritime rights and interests".

On human rights, he urged the US to recognise that different countries have different realities and it needed to "respect people of all countries in the right to choose their own development path independently". The one area where there was genuine co-operation was in the field of climate change.

The US welcomed China's commitment to set up a national cap-and-trade system to limit emissions. The system will set an annual limit of greenhouse gas emissions by companies and allow them to trade their pollution permits with one another.

Analysts, while generally underwhelmed by the meeting, said that there was enough accomplished for both sides to come away satisfied. China can hail a new model of great power relations, while the US will see the visit as successful management of a rising power.