Third of Britons see interest rates rising in next 12 months 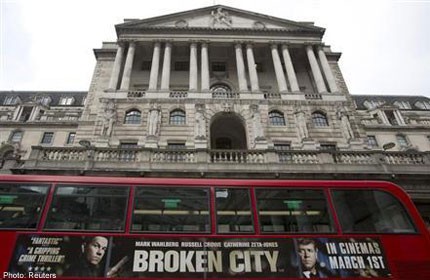 LONDON - More than a third of Britons think interest rates will rise in the next 12 months, a survey showed on Sunday, suggesting the Bank of England's first attempt to ease concern over higher rates ahead has had little effect beyond financial markets.

The bank and its new governor, Mark Carney, will have to hope for more success with their next try - likely to come in more detailed form in early August - as they work to encourage consumers to spend more and spur economic growth.

The survey by financial data company Markit found that on top of the 35 per cent of respondents who expected the Bank to raise rates over the next year, a further 18 per cent thought it would happen in 13 to 24 months' time.

Only 16 per cent of Britons agreed with financial markets, which are predicting that the central bank will start raising interest rates in two years' time at the earliest.

"The survey results present the Bank with the challenge of better communicating the prospect of an extended period of low interest," said Markit economist Chris Williamson.

"The spectre of higher interest rates is a key factor restraining many of the UK's 11 million mortgage holders from feeling comfortable about increasing their current spending."

The outcome of the July 10-15 survey for Markit chimes with the findings of the Bank poll of households in May, before the central bank's latest steer on interest rates.

On July 4, after its first policy meeting under Carney, the Bank took the unusual step of warning that investors were predicting higher rates too soon.

That caused markets to push back expectations of the first rate rise into the second half of 2015 from the first half as thought before the announcement.

Markit's survey found that 27 per cent of respondents had no view on what would happen to rates, in a sign of uncertainty that could be also curbing consumption.

The Bank cut rates to a record low of 0.5 per cent in 2009 and has kept them there ever since as the British economy has struggled to recover from the financial crisis.

On August 7, the bank is due to report on the merits of sending clear signals on how long it will keep rates low. It will probably adopt such forward guidance, a policy favoured by Carney. In his former job running the Bank of Canada, he pledged to keep rates super-low for over a year.

In the survey, around 1,500 people were interviewed on behalf of Markit.