Thousands demonstrate in London against leaving the EU 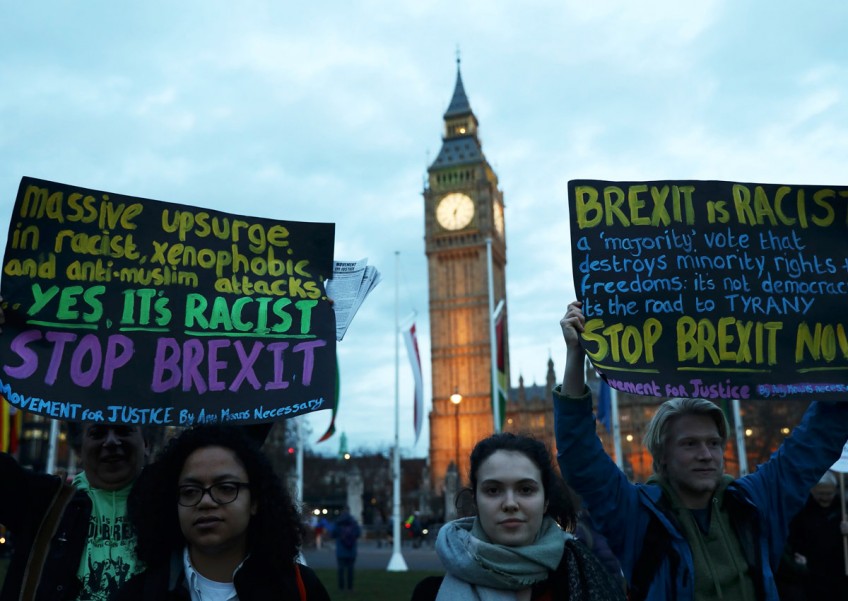 LONDON - Thousands of people marched through London on Saturday to protest against Britain leaving the European Union, just four days before Prime Minister Theresa May launches the start of the formal divorce process from the bloc it joined 44 years ago.

The Unite for Europe march was due to end with a rally in Parliament Square, scene of this week's attack by British-born Islam convert Khalid Masood in which four people died.

Marchers observed a minute's silence in memory of the victims at the start of the demonstration.

In bright sunshine, they waved EU flags and banners with slogans like "So what's the Plan" and "Stop Brexit" as they made their way to parliament.

One banner from a marcher in Hastings on the south coast - scene of England's epoch-defining defeat to William, Duke of Normandy - read: "Hastings, in Europe since 1066." Another simply said "Happy Birthday EU" in a reference to this weekend's 60th anniversary of the bloc's founding, currently being commemorated in Rome.

Joss Dennis was one of three coach loads of protesters who had travelled from Bristol in western England, which voted 62 per cent to stay in the EU in last June's referendum compared with the national 52-48 per cent vote to leave.

"With such a close vote, I don't see how anyone can call this the will of the people," she told Reuters.

"We have so much to lose: environmentally, politically and financially.

"A terrible mistake has been made but the situation is not beyond redemption," she added.

May has been adamant she intends to take Britain out of the EU following the referendum and will formally announce the start of the two-year leaving process on Wednesday.