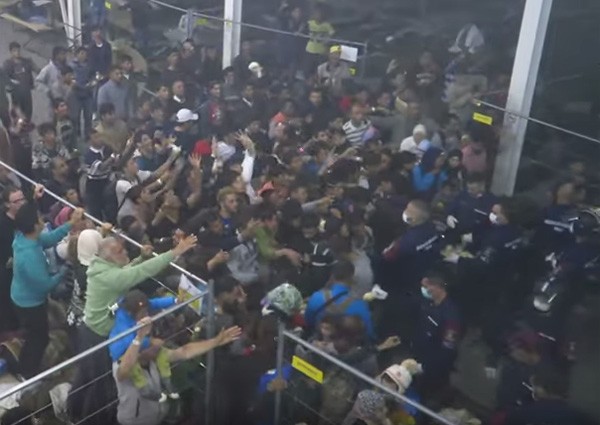 BEREMEND, Hungary - Crowded aboard buses and trains, thousands more migrants flooded into Austria on Sunday from countries unable or unwilling to cope with a desperate human tide fleeing war and poverty for a better life in western Europe.

Austrian police said more than 11,000 entered the country on Saturday, and another 4,700 arrived Sunday through the Nickelsdorf border post from Hungary.

Most of the migrants had made the gruelling journey across the Balkans into western Europe, with Croatia saying 21,000 had entered its territory in the past four days.

The Austrian Red Cross said 2,000 made it into Germany by avoiding border posts.

The bulk of the migrants are fleeing the war in Syria, with the European Union receiving almost a quarter of a million asylum requests in the three months to June.

Germany alone expects up to a million asylum seekers this year, but the country's Interior Minister Thomas de Maiziere said the EU should in the future take a finite number of migrants, while sending the rest back to a safe country in their home regions.

The continent's biggest migratory flow since the end of World War II has dug a deep rift between western and eastern EU members over how to distribute the migrants.

The crisis has raised questions over the fate of the Schengen agreement allowing borderless travel across most countries within the 28-nation bloc, with several of them imposing border controls.

Hungary's right-wing government has faced international criticism over violent clashes with migrants and a hastily erected fence along its frontier with Serbia, but in a shift late Friday, Hungarian authorities began transporting thousands of migrants straight to the border with Austria, an apparent bid to move them through and out of their territory as quickly as possible.

Then on Sunday, Hungary reopened its main border crossing with Serbia, whose closure a week ago had led thousands of migrants to surge into Croatia.

The Horgos-Roszke 1 crossing is on the highway that before the migrant crisis was the main route linking Belgrade and Budapest.

After Hungary shut its border crossings to migrants, most flooded into Croatia, which within days announced that it could not cope with the flow and began to redirect the migrants back toward Hungary or toward Slovenia.

Croatia, Hungary and Slovenia are all EU members, but only the latter two belong to the passport-free Schengen zone.

In the meantime, the Croatian and Hungarian authorities have coordinated their efforts on the ground.

AFP correspondents reported that on Saturday and into the night, around 15 Croatian buses brought hundreds of migrants to Baranjsko Petrovo Selo, who crossed on foot to Beremend, in Hungary, where Hungarian buses were waiting for them.

A train with around 1,000 migrants who had boarded in Tovranik, in the far east of Croatia, headed for Hungary on Saturday to a stop near the Letenye border crossing, where they got out and began walking in the rain.

They were among some 3,000 migrants who left Croatia on Saturday, authorities there said.

The rain continued to fall early Sunday, when several waiting buses could be seen on the Hungarian side and Croatian radio said several buses were headed towards Beremend.

Thousands more were en route Sunday to Austria, most via Hungary from Croatia or Slovenia.

On Sunday, a Slovenian police officer in the border town of Bregana told AFP that buses would transport the migrants at the rate of 100 per hour.

Meanwhile the perilous route by sea saw new tragedy, with 26 migrants feared missing Sunday off the Greek island of Lesbos, one of the Greek islands that has seen a heavy influx of refugees from war-torn Syria via Turkey.

More than 2,600 people have died among the nearly half a million who have braved perilous trips across the Mediterranean to reach Europe so far this year.

Many migrants have turned to Turkey's land borders with Greece and Bulgaria to avoid the sea voyage.

Altogether, Greece has seen more than 300,000 refugees and migrants enter the country this year, most of them passing through to other European countries.

EU interior ministers are to meet again on Tuesday, followed by an emergency summit on Wednesday.

European leaders also called for more action to tackle the problem within Turkey and the Middle East.

EU Enlargement Commissioner Johannes Hahn said the bloc was earmarking aid of "up to one billion euros" ($1.13 billion) to encourage Syrian refugees in Turkey to stay there, while Austria and Germany issued a joint call for UN countries to contribute an extra five billion euros to help refugees living in camps in Lebanon and Jordan.

Of the more than four million Syrians who have fled their country, nearly half have sought shelter in Turkey, while more than a million are now living in Lebanon and at least 600,000 in Jordan.