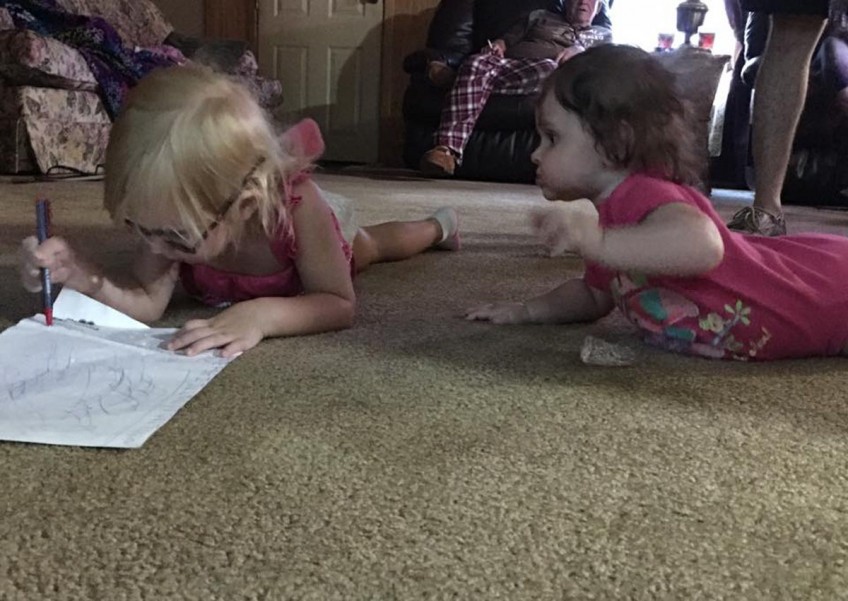 Amanda Hawkins, 19, left her two daughters in a car overnight in Kerrville, Texas, and found them unconscious when she finally went to retrieve them the next day.

While their mother was hanging out in a house nearby with her 16-year-old male friend and some other friends, the two girls, Brynn Hawkins, 1, and Addyson Overgard-Eddy, 2, were left in the vehicle.

From Tuesday night around 9pm until noon Wednesday - about 15 hours - the girls were left in the car without food, water, or bathroom visits.

Friends inside the house could hear the kids crying and urged her to bring them in, but Hawkins waved them off, saying: "No, they're fine. They'll cry themselves to sleep."

In a news release, Kerr County Sheriff W. R. "Rusty" Hierholzer said that the toddlers were in "grave condition" by the time they were taken to and assessed by Peterson Regional Medical Center in Kerrville.

They had to be transferred to the better-equipped University Hospital in San Antonio, about an hour away.

Unfortunately, the two girls were beyond saving and died around 5pm on Thursday, only a few hours after they had arrived at the hospital.

Even worse, investigators found that Hawkins initially delayed taking her daughters to the hospital.

Upon discovering the girls, she took them into the house, tried to bathe and re-dress them while they were presumably unconscious, and did not immediately take them to the hospital because she didn't want to get into trouble, according to a report by CNN.

Police said to The Washington Post that Hawkins suggested the girls had collapsed after smelling flowers at Flat Rock Lake, perhaps after smelling or ingesting something poisonous.

Her lie unraveled pretty quickly, and Hawkins later confessed to leaving her daughters in the car overnight.

It was estimated that Texas temperatures rose to more than 30 deg C during the day on Wednesday, and was probably made worse by the humidity in the car.

Sheriff Hierholzer said, "This is by far the most horrific case of child endangerment that I have seen in the 37 years I have been in law enforcement."

Investigations are ongoing regarding specific causes of death, and Hawkins is currently being held on $70,000 (S$96,900) bail at the Bexar County Jail, according to Fox News.