Manila - Leading Islamist militant Isnilon Hapilon, who is on the United States' list of "most wanted terrorists", has been killed in the battle to reclaim a rebel-held Philippines city, the defence minister said on Monday.

Security analysts describe Hapilon as the leader of the Islamic State group in Southeast Asia, where the jihadist outfit wants to establish a caliphate as they suffer battlefield defeats in Iraq and Syria.

"(Our troops) were able to get Isnilon Hapilon and Omar Maute. They were both killed," Defence Secretary Delfin Lorenzana told reporters, referring to another fighter who led the attack with Hapilon on the southern Philippines city of Marawi city in May.

The US government had offered an US$5 million (S$6.8 million) bounty for information leading to Hapilon's arrest, describing the 51-year-old as a senior leader of the southern Philippines-based Abu Sayyaf group, which the US considers a "foreign terrorist organisation".

Lorenzana said Philippine ground forces mounting a final assault on the militants in Marawi killed Hapilon and Omarkhayam Maute, one of two brothers who lead a militant group allied to Hapilon, early Monday. 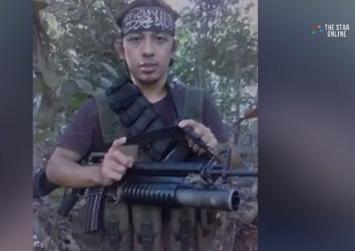 The bodies of the two men will be subjected to DNA tests because of the reward offer from the US and Philippine governments, he added.

"The implication of this development is that the Marawi incident is almost over and we may announce the termination of hostilities in a couple of days," Lorenzana said.

The Philippine military says Hapilon joined forces with the Maute group on May 23 on a rampage across Marawi following a foiled attempt to arrest him.

Pro-IS gunmen occupied parts of Marawi, the Islamic capital of the mainly Catholic Philippines, on May 23. Since then more than 1,000 people had been killed and 400,000 residents displaced.

Hapilon is also accused of involvement in the 2001 kidnappings including of three Americans, two of whom were later killed.

Ahmad had helped plan the Marawi attack, authorities had said. The insurgents have withstood a relentless US-backed bombing campaign and intense ground battles with troops that have left large parts of Marawi resembling devastated cities in war-torn Syria and Iraq.