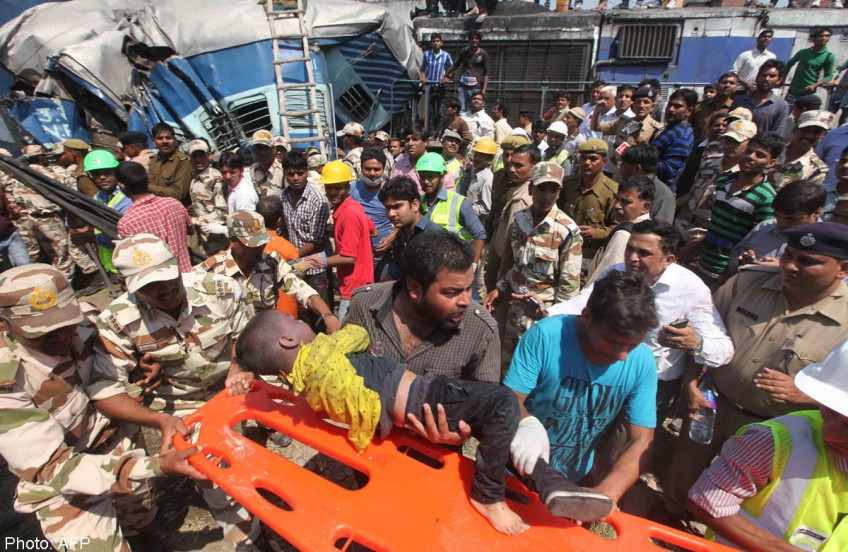 LUCKNOW, India - At least 32 people, including children, were killed and dozens more injured when an express train derailed in northern India on Friday, authorities said.

Television images showed two mangled carriages lying beside the track after the accident, which occurred around 30 miles (50 kilometres) from Lucknow, capital of the northern state of Uttar Pradesh.

Neeraj Sharma, chief public relations officer for Northern Railway, told AFP that the rescue work had been completed by early afternoon and a total of 32 bodies had been found.

Another 50 people received injuries in the crash.

An official at the scene said one of the coaches was vacant at the time of the accident, limiting the number of deaths.

The Press Trust of India (PTI) news agency said the train apparently overshot a signal before crashing into a barrier and coming off the rails.

Sharma said there would be an official investigation into the cause of the accident, which could have been down to driver negligence or the brake system failing.

India's Railways minister expressed his grief at the loss of life and promised to expedite the process of modernising the country's rail infrastructure.

"This budget I focused on safety as I feel saddened by loss of life and injuries to our valued passengers. We must modernise crumbling infra," Prabhu said on Twitter.

"We are prioritising safety as thrust area." The minister said that the "neglect of past or limited budget resource can't be the reason for accidents."

"...it takes some time to neutralise past inaction. We will," Prabhu added.

The railways minister said last month that decades of underinvestment had taken their toll on the rail network and promised to restore it to its former glory.

Deadly accidents are common on India's railways, whose vast and rundown network carries tens of millions of people daily.

Last month a passenger train derailed in southern India after a boulder fell on the tracks, killing at least 10 people.

India's government has pledged to invest US$137 billion (S$190 billion) to modernise its crumbling railways, making them safer, faster and more efficient.