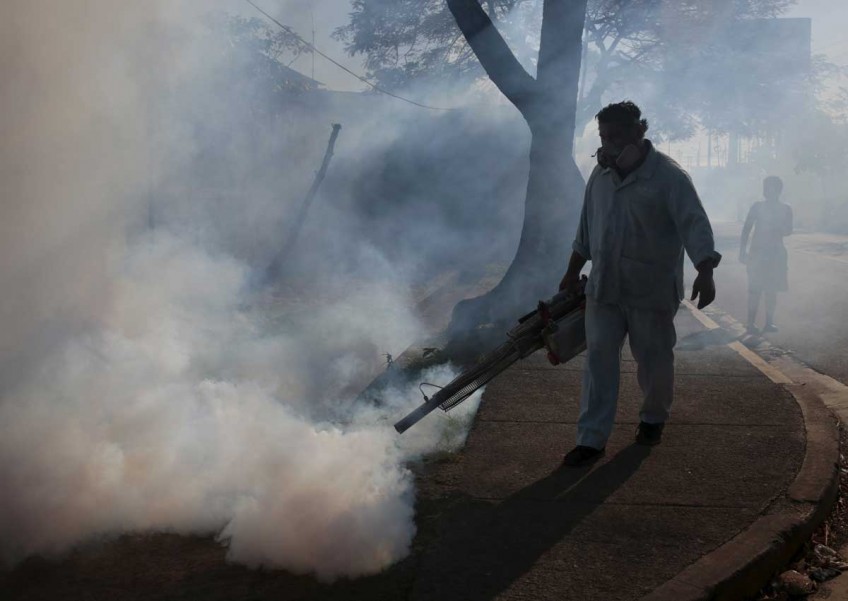 A health ministry worker fumigates a street to kill mosquitoes during a campaign against dengue and chikungunya and to prevent the entry of Zika virus in Managua, Nicaragua January 26, 2016.
Reuters

Airlines, hotels and cruise operators serving Latin America and the Caribbean are facing growing concern among travelers spooked by the mosquito-borne Zika virus.

The outbreak of the virus, linked to brain damage in thousands of babies in Brazil, comes as a record percentage of Americans plan a vacation in coming months and a near-record proportion of them look to take advantage of a strong US dollar by going abroad.

The Centers for Disease Control and Prevention warned travelers via Twitter to consider postponing travel to areas with ongoing Zika transmission.

Canada and Chile are the only countries in the Americas the virus is not expected to reach, the World Health Organization (WHO) said on Monday.

United Airlines said it was allowing customers who had reserved tickets for travel to Zika-impacted regions to postpone their trips or obtain refunds with no penalty.

Norwegian Cruise Line Holdings Ltd and rival Carnival Corp said they would allow expectant mothers covered by the CDC advisories to reschedule cruises to a later date or switch to an itinerary outside the affected countries.

But some Twitter users lamented their inability to get a refund from tourism operators.

Stu Privett, a human resources systems specialist for the Royal College of Nursing in London, tweeted about cancelling a trip to Barbados with his wife, who is in her first trimester. Privett said he was unable to get a refund from Virgin Holidays.

"They basically said it was our choice not to go on the holiday," Privett said.

"Basically (it's) a case of 'we just lose all the money we've spent.'" A representative for Virgin Holidays, which is owned by Richard Branson's Virgin Group, said the company would look into the claim.

Still, many airlines and tourist authorities said they have seen minimal impact. "There is no reason tourists can't walk around in bikinis,"Cancun tourist association president Carlos Gosselin said.

A Carnival spokesman said there had been less than 10 requests to reschedule trips or change itineraries. A Norwegian spokeswoman said it had a single cancellation and no itinerary change requests.

Hotel chain Hilton Worldwide Holdings Inc said in a statement it was working closely with local health authorities throughout the region to follow CDC prevention recommendations.

Still, some tourists with short-term travel plans to Latin America were having second thoughts. "It's the people who are going to travel in the next few weeks who are starting to ask more questions and rethink their plans," said Jennifer Michels, a spokeswoman for the American Society of Travel Agents, in Alexandria, Virginia.

Data released Tuesday from the US Conference Board as part of its monthly Consumer Confidence Index showed a record 54.4 percent of Americans plan a vacation in the next six months.

Some 11.2 percent said they plan to travel overseas, one of the highest readings in the survey's history dating back to 1978.