'On trend' men dare to be fashionable 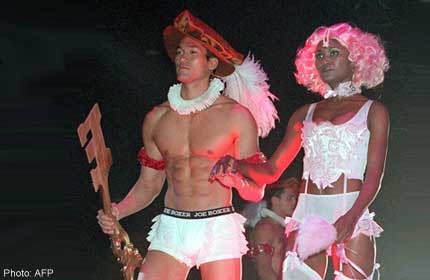 PARIS, France - When Nick Graham created the Joe Boxer underwear brand at his kitchen table in San Francisco in 1985, the experience left him convinced him of two things about men's fashion.

Pattern and colour, he concluded, should not be the exclusive preserve of women's fashion, and men - given choices - will always opt to try something new.

Nearly 30 years on and the men's catwalks in Paris in June were a blaze of vibrant colour and bold prints.

And while Graham acknowledges that what appears on the catwalk is for the "high one per cent of the market", he says it still represents a "subtle transformation" in what men are willing to wear.

"I think we men are incrementalists," Graham told AFP by telephone from San Francisco where he is working on the launch his own men's wear label after a spell away from the industry.

"They (men) are kind of wanting to be a lot more adventurous but not so much that it scares other people or themselves," he said.

The Canadian entrepreneur, who built Joe Boxer into a business with annual revenue of around $100 million by the end of the 1990s, is famed for giving himself the title "chief underpants officer" and pouring his sense of humour into the brand.

Marketing stunts included dressing up as Britain's Queen Elizabeth II and suspending himself from a crane above New York's Time Square.

On another occasion he flew 200 magazine editors from the US to Iceland for a fashion show featuring a model in Viking horns and singing the Icelandic national anthem.

Graham's new venture, a sportswear collection for 2014, comes more than a decade after he sold Joe Boxer to Windsong Allegiance in 2001 when it was on the brink of bankruptcy. The label was then sold to Iconix Brand Group in 2005.

Now, he believes the potential he saw in the men's market three decades ago has finally come to fruition, opening up big business opportunities.

Men, Graham argues, are taking a greater interest in their clothes than ever before, with many more now buying for themselves rather than relying on their wives or partners to do it for them.

"Women's apparel sales are always twice as big as men's. It's not because there's twice as many women, it's just that they buy twice as much as men," he said.

He believes the change in men's attitude towards fashion began some time ago in underwear.

"Men became much more aware of their underwear... now I start to see that happening with clothing. It is very subtle, it can be just a scarf, but it is happening."

The flourishing of the sector has also been helped by the advent of Internet shopping which Graham says suits the way men like to shop and has resulted in men being exposed to a far greater range of sartorial possibilities.

"I think the best example especially in menswear is (online retailer) Net-a-Porter. That business is incredible - in the last two years it's just gone through the roof.

"Because of that, things that men in Milwaukee would never have expected to see, they are being exposed to."

For the first time also, he says, men have started to respond to trends such as suits with a narrower fit and lapels, following the influence of designer Hedi Slimane's "skinny" tailoring.

Graham's focus is now to offer men the chance to take small steps towards expressing themselves through their clothes and dressing more imaginatively.

"Men basically wear about six to seven bodies (looks) whereas women have hundreds of choices. I'm just trying to take that and say 'OK this is a shirt, now how can we change it to give it a little more character'," he said.

"The market I'm after is not taking market share from anywhere else - it's creating new market share.