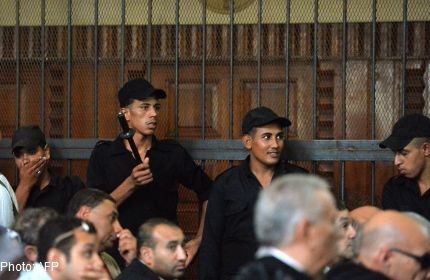 Egyptian police guard an empty defendant’s cage inside a Cairo courtroom during the trial of three jailed Muslim Brotherhood leaders on August 25, 2013.

CAIRO - An Egyptian court adjourned Sunday the trial of three jailed Muslim Brotherhood leaders because of their absence, with the judge ordering they be present for the next session in October.

At the same time, toppled dictator Hosni Mubarak appeared in a separate court for his first hearing since he was released from jail to house arrest on Thursday.

The hearings come against the backdrop of political uncertainty in the wake of the July 3 ouster of Islamist president Mohamed Morsi, followed by a crackdown on his Brotherhood movement.

Security sources told AFP that the Brotherhood defendants, including supreme guide Mohamed Badie and two deputies, were not brought to court because police feared protesters could attack the trucks transporting them to prison.

But the judge overseeing their trial for inciting the deaths of protesters adjourned the proceedings over their absence and asked the interior ministry to bring them to the next hearing on October 29.

Badie, along with deputies Khairat al-Shater and Rashad al-Bayoumi, faces charges related to the deaths of protesters who stormed the Brotherhood's Cairo headquarters on June 30.

Badie is the first Brotherhood supreme guide to be arrested by Egyptian authorities since 1981.

Security sources say at least 2,000 members of the Brotherhood have been arrested in recent days in a crackdown that has sent many more into hiding.

Shater's lawyer, Atef el-Galaly, insisted the charges against his client were political.

"The whole case is fabricated. The charges aren't true at all. It's a political case," he told AFP.

Three other Brotherhood members are standing trial with the leaders, accused of carrying out the murders on June 30.

And 29 others are also facing charges including "intimidating citizens" in relation to the same incident, which came as millions of Egyptians took to the streets to protest against Morsi's rule on June 30.

The session against the Brotherhood leaders came as Mubarak appeared in court for the first time since he was released from jail.

It was also the first time Mubarak had been seen in public since he left Tora prison on Thursday, after being cleared for pre-trial release by a court.

He was immediately placed under house arrest by interim prime minister Hazem el-Beblawi, on the basis of powers granted to him under the country's state of emergency.

On Thursday, the 85-year-old former president was flown by helicopter from prison to a military hospital where he has received medical treatment in the past.

He still faces an array of charges, including complicity in the deaths of some 850 people killed in the 2011 uprising against him, and corruption.

The court adjourned his trial to September 14, after creating three specialised committees to sift through evidence.

Mubarak was convicted in June last year of complicity in the deaths of protesters and sentenced to life in prison, but a retrial was ordered in January after he appealed.

The charges carry a maximum penalty of death.

Mubarak has often appeared frail during court sessions, lying on a stretcher, flanked by his sons Gamal and Alaa, who are also on trial.

But on Sunday, he appeared to be sitting up and listening to proceedings from the courtroom cage where defendants are held.

He was dressed in white and wore sunglasses in the courtroom.

Other defendants in the case, including Mubarak's one-time interior minister Habib Adli, were also present.

The two court sessions come as Egypt wrestles with the fallout from the ouster of Morsi by the military following massive protests against his rule.

Lawyers defending Mubarak and his security chiefs argued Islamists were primarily responsible for violence during the uprising that toppled him, with one lawyer saying it mirrored violence in recent weeks by Morsi's supporters.

In recent days, violence appears to have abated, prompting authorities to announce on Saturday that they would shorten a night-time curfew by two hours.

The curfew was imposed in 14 provinces on August 14, as violence ripped through the country when security forces began the forcible dispersal of two pro-Morsi camps.

Nearly 600 people were killed in a single day across Egypt, the country's bloodiest day in decades.

Christian properties and churches have also come under attack, allegedly by Islamist protesters.

Authorities have responded to the violence with a massive crackdown against Brotherhood members, which has shattered the group's structure and thinned the numbers at ongoing demonstrations against Morsi's ouster.