JAKARTA - Truck driver Agus Tri Pamungkas was not sure how to get to Singakerta village in Ubud, Bali to drop off the truckload of rocks he had driven from Banyuwangi, East Java. So he did what many lost drivers do: check Google Maps.

Unfortunately, the app led him down a route that ended with his truck falling off a cliff into the Wos River near Banjar Gelogor, Lodtunduh village, Ubud.

Gelogor village guard I Ketut Sumardika said Agus was following a route that was only recommended for motorcycles.

"When he got to a bridge, he considered turning back, but because the road was not more than 3 meters [wide], he couldn't turn around," Sumardika said as quoted by kompas.com. 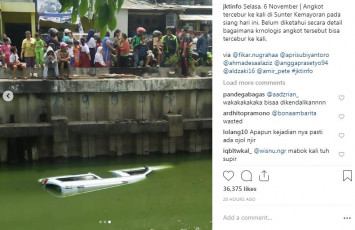 Agus continued on the route to a damaged uphill road, where his truck stalled and upended into the river.

Those nearby helped rescue the driver by cutting through the bamboo trees at the location. The 23-year-old sustained bruises and sprains and has since been released from the hospital.

Agus' father and employer went to the village to thank the people for helping him.

Gianyar Public Works Agency head I Nyoman Nuadi said the damaged road was under the jurisdiction of Gianyar regency and called on the village to put a sign on the road to warn large vehicles from going that way.