Trump to ask for $11.7b for border wall in budget: Sources

WASHINGTON, US - President Donald Trump will ask Congress for an additional US$8.6 billion (S$11.7 billion) in the budget to help pay for the wall he promised to build on the border with Mexico to combat illegal immigration and drug trafficking, sources said.

The demand is more than six times what Congress allocated for border projects in each of the past two fiscal years, and 6 per cent more than Mr Trump has corralled by invoking emergency powers this year.

Democrats, who oppose the wall as unnecessary and immoral, control the US House of Representatives, making it unlikely the Republican president's request will win congressional passage. Republicans control the Senate.

Funding legislation needs to be passed before Oct 1 - the start of the 2020 federal fiscal year - or the government could shut down again. 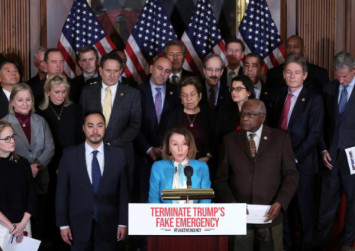 If Congress and the White House fail to agree to lift mandatory spending caps set in a 2011 law, steep automatic cuts in many programmes would kick in.

Mr Trump will propose an overall 5 per cent increase to the Department of Homeland Security budget over fiscal 2019 appropriations, including US$3.3 billion, or 22 per cent more, for Customs and Border Protection, and US$1.2 billion more for Immigration and Customs Enforcement, a 16 per cent hike, officials said.