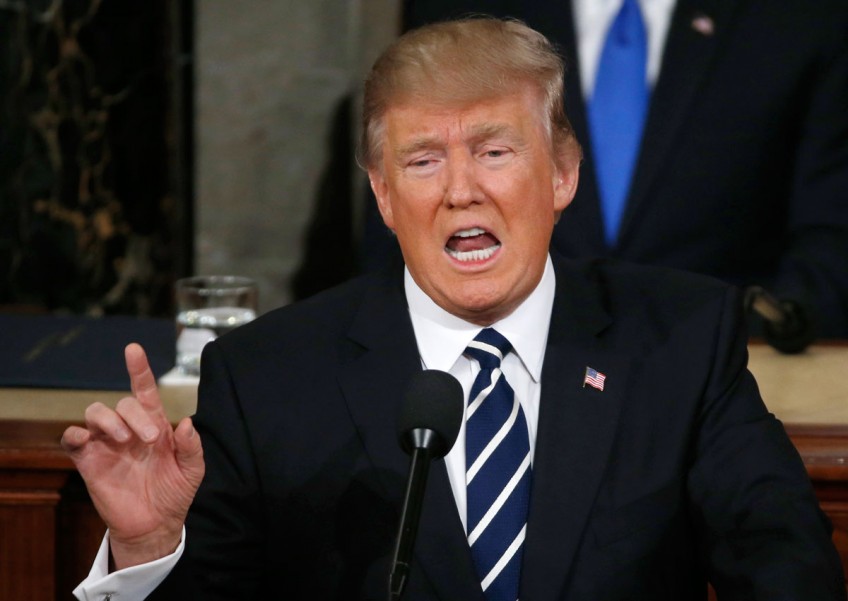 Republican US Representative Todd Rokita keeps a clock hanging on the wall of his Capitol Hill office that tracks the US government's rising debt in real time and reminds him of his top priority: reining in federal spending.

"I was sent here on a fiscal note," said the Indiana lawmaker and vice chairman of the House of Representatives Budget Committee, who rode a Republican wave during his first election to Congress in 2010.

When President Donald Trump unveils his budget for the 2018 fiscal year on Thursday, Rokita will be among many conservative Republicans cheering proposed cuts to domestic programs that would pay for a military buildup.

More moderate Republicans are less enthusiastic and worry Trump's budget could force lawmakers to choose between opposing the president or backing reductions in popular programs such as aid for disabled children and hot meals for the elderly.

"What you would hope is that the administration is aware of the difficulty of some of these things," said Representative Tom Cole of Oklahoma.

The release of Trump's budget, which comes as the Republican president is facing an intraparty revolt over proposed legislation to replace the Obamacare healthcare law, could open another fight among Republicans who control both houses of Congress.

To keep the government running, lawmakers will need to approve a spending plan later this year.

The White House has released few details about Trump's budget, other than making clear the president wants to boost military spending by $54 billion(S$76 billion) and is seeking equivalent cuts in non-defence discretionary programs.

But several agencies, including the State Department and the Environmental Protection Agency, have been asked to prepare scenarios for steep reductions, according to officials familiar with the discussions.

While supporting deficit-reduction efforts, Cole said a major research university in his district could get hit by National Institutes of Health cuts, as could sewage treatment facilities funded by the EPA.

Republican Senator Rob Portman, whose home state of Ohio sits on the southern shores of Lake Erie, expressed concern about media reports saying the Trump budget had penciled in sharp cuts in a cleanup programme for the Great Lakes.

While Rokita, who was among a group of Republican lawmakers who met with Trump last week, appeared comfortable with what he had learned so far about Trump's budget, some Republican members of the conservative House Freedom Caucus said they wanted to see even further budget cuts.

Representative Mo Brooks of Alabama said the outcry from lawmakers over the expected cuts underscored to him that the blueprint would be a "a very large step in the right direction" of reining in the debt.

Brooks added: "My fear is that the Trump budget will not be austere enough to minimise America's risk of suffering the kind of debilitating insolvency and bankruptcy that is destroying the lives of Venezuelans right now."

OPEC member Venezuela is immersed in a deep economic crisis, with inflation in triple digits, shortages of basic goods, and many people going hungry.

Brooks and other members of the Freedom Caucus are among the most vocal critics of the legislation backed by the White House to repeal and replace the Affordable Care Act, former Democratic President Barack Obama's signature healthcare plan, known as Obamacare.

To try to woo the conservative lawmakers on Trump's legislative agenda, budget director Mick Mulvaney, himself a former member of the House Freedom Caucus, has invited them to a bowling and pizza night at the White House on Tuesday night.

Schweikert said he hoped to revive a proposal from a few years ago, in the midst of a fight over raising the US debt limit, that would have allowed the government to take a series of alternative, albeit controversial steps, such as paying some creditors ahead of others.

One senior Republican aide, who referred to Trump's budget as a "slash and burn" proposal, said one fear of some House lawmakers was that they would be pressured to back big spending cuts only to have them rejected by the Senate, where Republicans hold a slimmer majority.

The risk for House members is that their votes could prompt a backlash in the 2018 congressional elections.

Senate Majority Leader Mitch McConnell has said a budget that cuts State Department funds by one-third is unlikely to pass in his chamber.

Other high-ranking Republicans are setting off alarms.

Senator Lindsey Graham, following a White House lunch on Tuesday with Trump, said: "What I told him is that when we get in a deadlock between the House and the Senate, different factions of the party ... you're the guy who needs to come down and close the deal."

Cole said Congress would ultimately have the final say on the budget.

"At the end of the day, we'll have a budget. We'll pass the budget," he said. "Our budget is not necessarily the president's budget."