The Senate Judiciary Committee announced that the 39-year-old Trump Jr. agreed to testify before investigators behind closed doors. No date was immediately given.

The eldest Trump son also agreed to provide documents requested by the committee, its chairs Republican Chuck Grassley and Democrat Dianne Feinstein in a said in a joint statement. 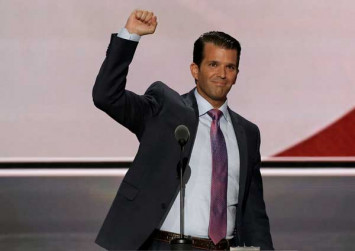 The president's son-in-law Jared Kushner gave information in a similar format in July, on his ties to Russia before and after the November 2016 election to the Intelligence Committees of the House of Representatives and Senate.

Lawmakers involved in the investigation would have liked public testimony by Trump's son, son-in-law and other aides; they can be ordered to testify but were not.

Trump Jr and Kushner, both very close to the president during the campaign, had multiple contacts with Russian people during that period. They have denied any collusion.

US special prosecutor Robert Mueller is conducting his own investigation separately that could lead to indictments.

A grand jury is reported to have been impaneled in Washington to look at evidence, and the White House has been asked for documents related to former national security adviser Michael Flynn, who was fired shortly after taking office for his undisclosed Russia contacts.