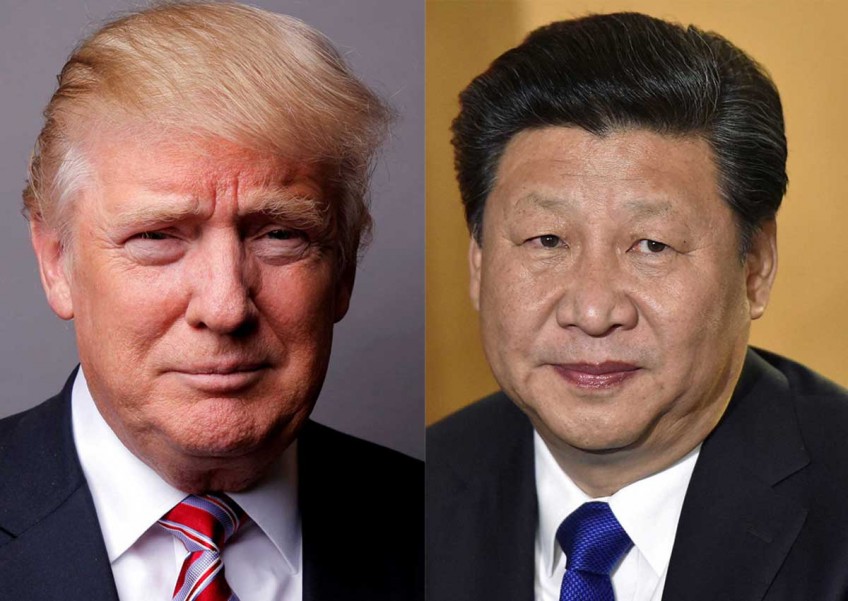 US President Donald Trump has predicted an upcoming meeting with his Chinese counterpart Xi Jinping would be "very difficult", staking out an adversarial position ahead of the high-profile first summit between the leaders.

Trump's comments Thursday appeared to herald a return to a tougher line from the president, who took a hawkish tone on the Asian giant in the weeks after his election before softening his rhetoric.

"The meeting next week with China will be a very difficult one," Trump tweeted, in apparent reference to a Xi visit planned for next week in Mar-a-Lago.

"We can no longer have massive trade deficits... and job losses. American companies must be prepared to look at other alternatives." The summit at Trump's Florida residence will be the first face-to-face meeting between the heads of the world's two most powerful nations and leading economies.

It follows a rocky start to US-China relations under the billionaire politician, who has repeatedly blasted Beijing for its trade policies and reluctance to bring pressure on North Korea over its nuclear and missile programs.

But at a briefing in Beijing Friday, China's vice minister of foreign affairs Zheng Zeguang sidestepped questions about Trump's remarks, repeatedly emphasising that "both China and the US attach great importance to the upcoming presidential meeting." Washington and Beijing "hope for a successful meeting so that a correct direction will be set for the growth of bilateral relations", he added.

The meeting, which is scheduled for April 6-7 and was confirmed by both countries Thursday, could be crucial in setting the tone of the relationship between the two powers in coming years.

In a statement Thursday, the White House said that the leaders will "discuss global, regional, and bilateral issues of mutual concern".

Just weeks ago the summit seemed a distant possibility after Trump infuriated Beijing with suggestions he might break from the US's long-standing One China Policy, which nominally acknowledges the Asian giant's claims over Taiwan without recognising them.

In a conciliatory phone call in mid-February, the US president walked back controversial comments on Taiwan, creating an opening for Washington and Beijing to discuss a meeting.

"The summit could well be a peaceful combination of a strategic kumbaya and economic gift giving, before storms erupt later over trade, regional hotspots, and human resources-issues," according to Douglas Paal, Asia Director at the Washington-based Carnegie Endowment for International Peace.

But Trump's tough language on trade and increasing frustration about China's policies on North Korea might be a signal that he is already willing to throw sand in the gears.

Relations have been strained by China's fierce opposition to a US missile defence system being rolled out in South Korea to protect against attacks from the North.

The US ambassador to the United Nations Nikki Haley on Thursday said China can and must do more to force North Korea to halt its nuclear and missile programs.

And, amid reports that Pyongyang is preparing another banned nuclear test, she said Washington would not settle for holding another UN debate.

Trump's tweet and Haley's comments appeared to be orchestrated, coming just hours after both countries publicly announced Xi's visit, which had been in the pipeline for weeks.

The tough tone could be a negotiating gambit from a man who prides himself on mastering the "Art of the Deal." But publicly, at least, China is not taking the bait. Asked about Trump's statements on trade deficits, vice foreign minister Zheng said that Chinese investment "has been growing rapidly over recent years.

"Chinese investment has created jobs for American communities and also helped ease the trade imbalance." In January, the US ran a $31.4 billion (S$43.9 billion) deficit with China, after a $347 billion deficit in 2016, according to US census data.

Zheng said the US could help address the imbalance by relaxing regulations on high tech exports to China and further opening to Chinese investment.

But firms in the US and EU have complained of a lack of reciprocal access to Chinese industries, with many sectors off-limits or restricted to outside investment. Among them are telecommunications, media, energy, and legal and financial services.