WASHINGTON - US President Donald Trump said on Monday (May 1) he would be "honoured" to meet North Korean leader Kim Jong-Un under the right conditions, dialing back threats of military action against the regime.

As Pyongyang threatens to carry out a sixth nuclear test that would further inflame tensions on the Korean peninsula, Trump appeared to offer the prospect of a diplomatic off-ramp.

"If it would be appropriate for me to meet with him I would, absolutely. I would be honoured to do it," Trump said in an interview with Bloomberg. "If it's under the, again, under the right circumstances. But I would do that," Trump said.

In recent weeks Trump has threatened and berated the regime, fearing it may be months away from marrying nuclear and long-range missile technology - making a strike against the western United States possible. 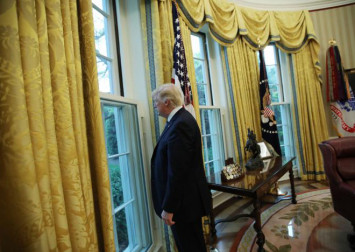 Trump's main gambit has been to encourage China to use its leverage to pressure Pyongyang - a strategy that has failed to produce results in the past.

The Republican president has also said he is ready to act alone in the stand-off, however - and on Monday signaled that this could involve face-to-face talks with Kim, who has yet to meet a foreign leader since taking power.

In the latest rhetoric to fuel jitters across the region, North Korea warned on Monday that it was prepared to carry out a nuclear test "at any time and at any location" set by its leadership.

The regime will continue bolstering its "preemptive nuclear attack" capabilities unless Washington scraps its hostile policies, a spokesman for the North's foreign ministry said in a statement carried by the state-run KCNA news agency.

"The DPRK's measures for bolstering the nuclear force to the maximum will be taken in a consecutive and successive way at any moment and any place decided by its supreme leadership," the spokesman added, apparently referring to a sixth nuclear test and using the North's official name, the Democratic Republic of Korea.

The North has carried out five nuclear tests in the last 11 years and is widely believed to be making progress toward its dream of building a missile capable of delivering a warhead to the continental United States.

It raises the tone of its warnings every spring, when Washington and Seoul carry out joint exercises it condemns as rehearsals for invasion. But this time fears of conflict have been fuelled by a cycle of threats from both sides.

The joint drills have just ended, but naval exercises are continuing in the Sea of Japan (East Sea) with a US strike group led by the aircraft carrier USS Carl Vinson.

CIA director Mike Pompeo was in South Korea on Monday, the US embassy in Seoul confirmed, following reports of an unannounced visit as tensions mount on the peninsula.

Pompeo's visit coincided with news that the controversial US missile defence system known as THAAD - whose deployment has angered China - is now operational in South Korea. "It has reached initial intercept capability," a US defence official told AFP on condition of anonymity.

Seoul regularly warns that Pyongyang can carry out a test whenever it decides to do so.

Pyongyang's latest attempted show of force was a failed missile test on Saturday that came just hours after US Secretary of State Rex Tillerson pressed the UN Security Council to raise pressure on the North.

Trump on Sunday repeated his determination to resolve the threat posed by North Korea, warning in a CBS interview: "We cannot let what's been going on for a long period of years continue."

But the US leader also offered some backhanded praise for Kim, saying he had faced a formidable challenge in taking over the country at a reported age of 27 after his father's death in 2011.

"He's dealing with obviously very tough people, in particular, the generals and others. And at a very young age, he was able to assume power," Trump said on CBS's "Face the Nation." "So obviously, he's a pretty smart cookie," he said.

"His point was he assumed power at a young age when his father passed away and there's a lot of potential threats that could have come his way and he's obviously managed to lead a country forward," said Press Secretary Sean Spicer.