Trump travel ban: what comes next?

WASHINGTON - The US Supreme Court's partial reinstatement of President Donald Trump's controversial travel ban has immigration lawyers and travellers trying to unpack how exactly the ban will be implemented when it takes effect Thursday.

The court ruled that the president's executive order targeting citizens from six mainly Muslim countries could go into partial effect.

But the court eased its punch by saying the measure could only be applied to travellers from those targeted countries "who lack any bona fide relationship with a person or entity in the United States." Though Trump has claimed the Supreme Court's decision a national security win, the partial ban is narrower in scope than the president's first two versions. Here's what we know about what the ruling means:

Who is allowed entry?

Of travellers from those countries, the nation's highest court said those "who lack any bona fide relationship with a person or entity in the United States" cannot enter - meaning US citizens and people with familial ties to the US can.

The court also said students accepted to attend university stateside or who had been hired by a US employer would be able to come - but emphasised that establishing such a connection just to gain entry would not be allowed.

But the Supreme Court justices did not clarify how distant the family member can be, or what happens to those who have applied to school or jobs and are awaiting a response.

And decisions over whose claims are tangible turn even murkier when it comes to short-term visitors. It is unclear how enforcement will differ for travellers coming specifically to see family and those travelling for tourism or medical treatment, for example.

The ruling permits Trump to reinstate a 120 day ban on refugees - though the Trump administration has already slashed the number of refugees it will admit annually to 50,000, a threshold the State Department anticipates hitting in a couple of weeks. 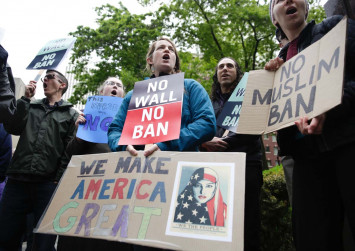 When will it take effect, and for how long?

Earlier this month Trump signed a memorandum informing agencies to begin enforcing the measure 72 hours after lower court freezes were lifted, and it is set to take effect Thursday.

Bloomberg News reported that implementation would begin at 8 p.m. EST (1200 GMT), in order to provide embassies and consulates around the globe prior guidance on how to enforce the ban.

Both the State Department and the Department of Homeland Security said they were waiting for clarification from the Justice Department on the meaning of "bona fide," to make sure authorities are clear on how to carry out the order.

Officials in the administration as well as in airports are hoping to avoid the chaos sparked by Trump's original executive order, which was unveiled in January to massive protests and confusion at border control points as well as a flurry of legal challenges.

Immigrant advocates said they would be at airports to aid any arrivals that immigration officers sought to turn away.

The ban on travellers from the six countries will last 90 days, and the refugee ban for 120, as defined by the executive order.

What are the next legal steps?

The decision closed five months of legal wrangling, and the Supreme Court will take up the case when it returns in October from its summer recess.

But as agencies await clarification on the partial ban's implementation, some anticipate legal battles will persist.

Conservative Justice Clarence Thomas, who wanted the ban implemented for anyone from the six countries, wrote Monday he fears the court decision "will prove unworkable." It "will invite a flood of litigation until this case is finally resolved on the merits, as parties and courts struggle to determine what exactly constitutes a 'bona fide relationship'."