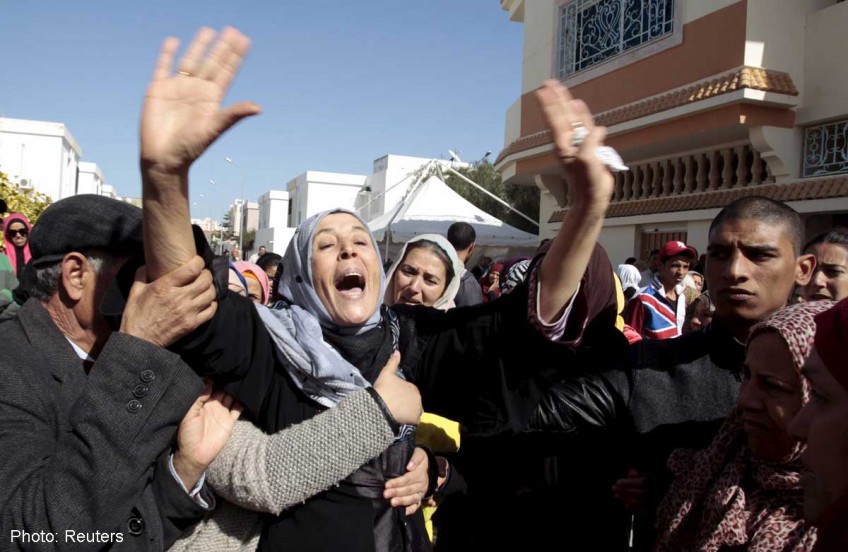 The mother (C) of Yassine al-Abidi, who gunned down 20 foreign tourists at Tunisia's Bardo museum, cries during her son's funeral in Tunis March 22, 2015.

TUNIS - Tunisia's President Beji Caid Essebsi said on Sunday that a third gunman involved in an attack that killed 23 people, mostly foreign tourists, at a Tunis museum last week was on the run.

The shootings at the museum inside Tunisia's parliament compound was one of the worst militant attacks in Tunisian history and brought to light the threat posed by Islamist militants to the young democracy, four years after its "Arab Spring" revolt.

Two gunmen were shot dead at the scene and authorities have so far arrested more than 20 people, of which ten officials believe were directly involved in the attack. Some had recently returned from fighting for Islamist militant groups in Syria and Libya.

"For sure there were three because they have been identified and filmed on surveillance cameras," Essebsi said in a televised interview with Europe 1 radio, iTELE and Le Monde newspaper.

"There are two who were executed and one who is on the run somewhere. But in any case, he won't get far," Essebsi said.

A Tunisian security source said investigations were still ongoing, but the third suspect appeared to have been involved in directing the attack and logistics, rather than as a gunman. He was known to authorities as an extremist, the source said.

"A third is being sought, he was a participant," the source said.

Tourism minister Salma Loumi told state news agency TAP that world leaders had been invited to participate on Sunday in a planned march against terrorism in Tunis.

Islamic State militants -- who have taken over parts of Iraq and Syria -- have claimed responsibility for the attack. But social media accounts tied to an al Qaeda-affiliated group in Tunisia have also published purported details of the operation.

Whoever was responsible, the Bardo attack illustrates how Islamist militants are turning their sights on North Africa. A particular focus is neighbouring Libya, where two rival governments are battling for control, allowing Islamic State to gain a foothold.