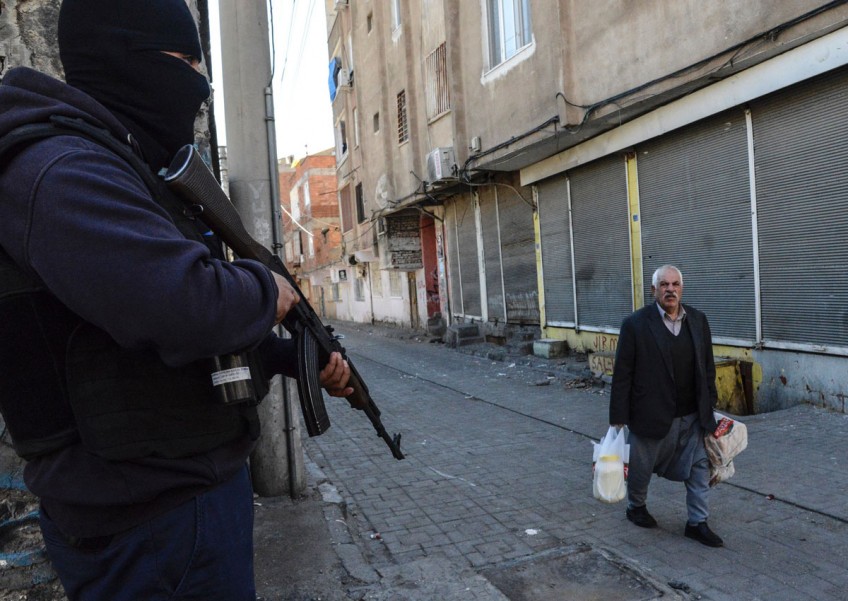 The detention of news editor Hamza Aktan comes amid growing alarm in Turkey over the increasing arrests and convictions of journalists under the rule of President Recep Tayyip Erdogan.
AFP

Turkish authorities on Saturday detained the chief news editor of a pro-Kurdish television channel over tweets posted on his account, the broadcaster said, as concern grows over freedom of expression in the country.

The news editor of IMC TV, Hamza Aktan, was detained at dawn Saturday by masked and armed police in a raid on his home in Istanbul, the channel said in a statement on its website.

He was released after some 12 hours in detention but still faces accusations from prosecutors of making propaganda for a "terror" group", it said.

IMC said he was released under judicial control, which means he is still subject to prosecution and will have to report regularly to the police.

Aktan was interrogated by police over tweets he had shared in 2015 including retweets of the views of two prominent pro-Kurdish commentators, the channel said.

Part of the case against him was also that he had retweeted a request by the BBC for information from the mainly Kurdish town of Cizre while it was under military curfew.

"Judicial control, like detention, is a form of punishment," IMC quoted Aktan as saying after his release. "This is right neither as a journalist or as a citizen. This is a challenge to freedom of expression," he said.

Aktan is a prominent journalist who has worked for several publications in Turkey and also published a book called "The Kurdish Citizen".

"Right from the beginning there has been a clampdown and pressure directed at IMC as well as freedom of expression," the channel's director Eyup Burc was quoted as saying. "Unfortunately, this is going to continue." Aktan's detention comes amid mounting alarm over the increasing arrests and convictions of journalists under the rule of President Recep Tayyip Erdogan, who became head of state in 2014 after over a decade as premier.

IMC TV, which was founded in 2011 and focuses on Kurdish, women's, and environmental issues, has already complained it was taken off air by Turkey's largest satellite operator on the grounds of broadcasting "terrorist propaganda".

It has however carried on broadcasting online.

The station was seen as the only pro-Kurdish channel in Turkey with an anti-government line. After recent reforms, state broadcasting company TRT now has a Kurdish-language channel, TRT Kurdi.

An Istanbul court earlier this week sentenced two prominent Turkish journalists from the opposition Cumhuriyet daily to two years behind bars for illustrating their columns with a cartoon of the Prophet Mohammed originally published by French satirical weekly Charlie Hebdo.

Separately, Cumhuriyet's editor-in-chief Can Dundar and Ankara bureau chief Erdem Gul are on trial on charges of revealing state secrets and could face multiple life sentences if found guilty.