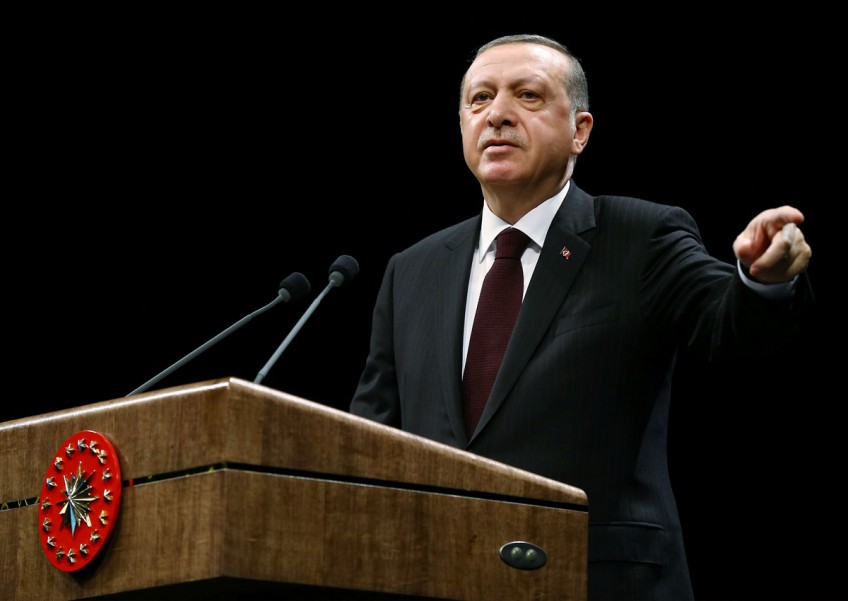 Istanbul - A diplomatic crisis between Turkey and the Netherlands deepened Monday as both sides traded bitter accusations after Turkish ministers were blocked from holding rallies to win support for plans to expand the powers of President Recep Tayyip Erdogan.

Erdogan at the weekend twice accused the Netherlands of acting like the Nazis, comments that sparked outrage in a country bombed and occupied by German forces in World War II.

Dutch Prime Minister Mark Rutte, who faces a major challenge from the far-right in a key general election Wednesday, said Erdogan's comments were unacceptable and it was Ankara that should apologise.

The Dutch authorities had at the weekend prevented the plane of Turkish Foreign Minister Mevlut Cavusoglu from landing and blocked Family Minister Fatma Betul Sayan Kaya from holding a rally in Rotterdam.

The ministers had been seeking to harness the support of an estimated 400,000 people of Turkish origin living in the country ahead of an April 16 referendum on constitutional changes giving Erdogan greater powers.

The Turkish foreign ministry on Monday summoned the Dutch envoy to Ankara for the third day in a row, handing two separate protest notes over The Hague's behaviour.

The Netherlands on Monday also issued a new travel warning to Dutch citizens in Turkey, urging them to stay "alert across the whole of Turkey".

Turkey has already responded furiously to Germany's refusal to give permission for ministers to hold rallies there, with Erdogan comparing such action to "Nazi practices".

The issue risks spiralling into a crisis with the EU as a whole, which Turkey has sought to join for more than half a century in a so far fruitless membership bid.

Erdogan, who has indicated he may attempt to address rallies in EU states in a move that could inflame the situation further, said Sunday that the West was showing its "true face" in the standoff.

He has repeatedly accused the Netherlands of acting like "fascists" and "Nazis", saying on Sunday: "I had thought that the era of Nazism was over but I was wrong." Rutte, under pressure to take a hard line against Erdogan as he faces the far-right populist Geert Wilders in Wednesday's poll, said there were no apologies to be made to Turkey.

"They (Turkey) should make excuses for what they've done yesterday," he said.

He expressed outrage at Erdogan's Nazi jibe, noting: "This country was bombed during the Second World War by the Nazis. It's totally unacceptable to talk in this way." .

Justice Minister Bekir Bozdag warned Monday that Turkey would do "what it is able" under international law against the Netherlands.

"We will not allow anyone to play with the honour of the Turkish nation and Turkish state," he said.

Deputy Prime Minister Nurettin Canikli described Europe as a "very sick man", a nod to the moniker used in the mid-19th century of the declining Ottoman Empire as the "sick man of Europe""From now on we are going to be watching the collapse of Europe," he said.

Turkish newspapers also responded with fury to pictures showing a Dutch police dog attacking a pro-Erdogan protester in Rotterdam as he lay on the ground.

Mass-circulation Swiss daily Blick waded into the controversy with a provocative headline in Turkish urging Swiss Turks to "vote against the Erdogan dictatorship".

Bringing out the millions-strong expatriate vote could be key in a referendum that is expected to be close and potentially a turning point in Turkey's modern history.

Analysts have said Erdogan is using the crisis to show that his strong leadership is needed against a Europe which he presents as being innately hostile to Turkey.

"Erdogan is looking for 'imagined' foreign enemies to boost his nationalist base in the run up to the April 16 referendum," Soner Cagaptay, director of the Turkish Research Programme at The Washington Institute, told AFP.

"By blocking (the rallies), they may have given Erdogan a life line to eke out a victory in the referendum," he added.