Turkey PM urges US to engage in 'self-criticism' over Gaza 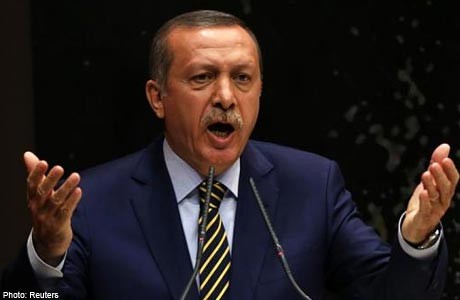 Opponents of Turkey's Prime Minister Tayyip Erdogan accuse him of increasing megalomania, and the authorities of setting up a cult of personality around the man who has ruled Turkey either as president or prime minister since 2003.

ANKARA - Turkish Prime Minister Recep Tayyip Erdogan on Sunday called on its NATO ally the United States to engage in "self-criticism" after it labelled his comments on Israel's Gaza assault "offensive".

"If America still says 'Israel is using its right to self-defence' it is America that needs to engage in self-criticism," Erdogan told the TGRT news channel.

A staunch advocate of the Palestinian cause, Erdogan has stepped up his criticism of Israel's operation in the besieged Gaza Strip, accusing the Jewish state of carrying out "state terrorism" and a "genocide" of Palestinians.

"When there are concerns we have about comments made or actions taken, even when it is a NATO ally, we certainly don't hesitate to make those concerns known," she said.

Erdogan said Sunday he was sticking to his comments, accusing Israel of using "disproportionate force" and killing Palestinians "mercilessly." "How can we ignore this? How can a country like the United States turn a blind eye to this?" he asked. "As a member of the UN Security Council, it needs to act fairly." More than 60 Palestinians were killed Sunday as Israeli forces pounded northern Gaza, taking the toll from the deadliest assault on the enclave in five years to over 400.

A Turkish delegation headed by foreign ministry undersecretary Feridun Sinirlioglu will pay a working visit to the United States on Monday, the ministry said in a statement.

The delegation is scheduled to meet with senior officials including from the State Department and National Security Council for talks on bilateral, regional and global issues.