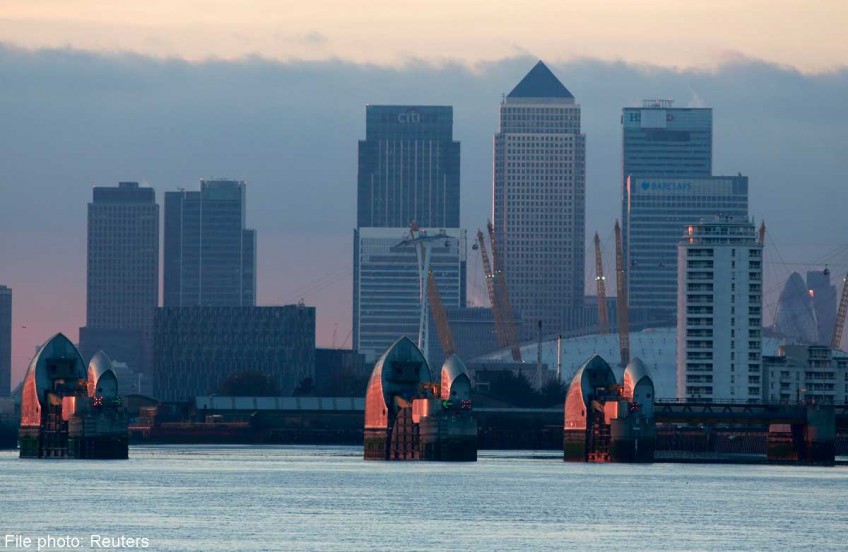 File photo of London's financial district as seen behind the Thames Barrier.

LONDON - Older Britons who currently receive a monthly pension from an annuity may be able to sell their right to a regular income for upfront cash, under proposals being considered by the government.

Last year Britain announced plans to ease requirements on new retirees to use any private pension savings to buy an annuity, which offers a guaranteed income for life.

In an article in an early edition of the Sunday Telegraph late on Saturday, pensions minister Steve Webb said he was considering something similar for existing pensioners.

"I want to see if we can get these freedoms extended to those who are receiving an annuity but who might prefer a cash lump sum," Webb said.

"I want to see people trusted with their own money wherever possible."

Insurance companies were enthusiastic about the prospect of being able to offer cash to buy back annuities, he added.

Historically Britain has required people who have taken advantage of generous tax breaks to build up private pension savings to buy an annuity on retirement, so that they do not end up a burden on the state.

But low global interest rates mean annuities offer lower incomes than in the past, making them unpopular with many of the 400,000 people who are coming up to retirement each year.

The government has also shifted the state pension towards a flat rate from a previous system that paid poorer pensioners more, reducing the incentive for moderately rich pensioners to spend all their own money early in retirement and rely on the state later.