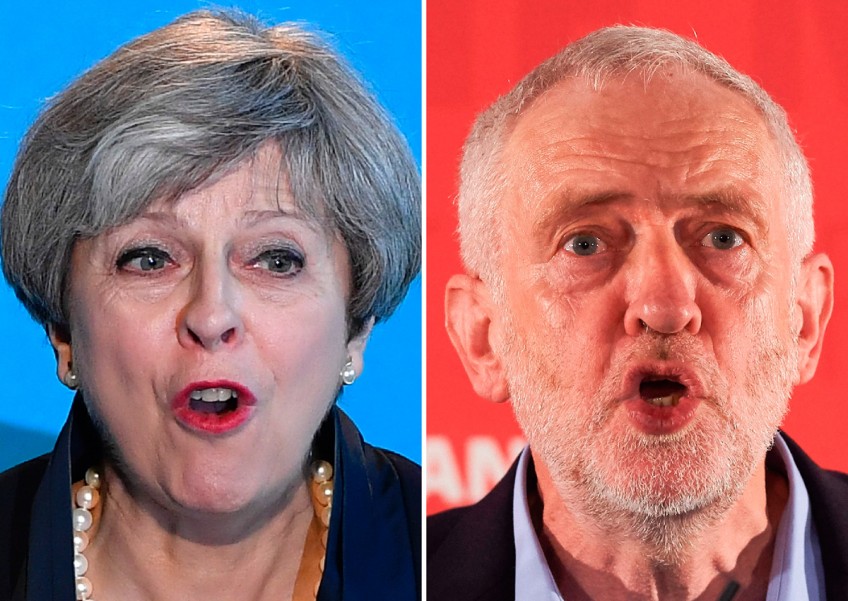 Polling experts are wary of calling the outcome of Britain's election although Prime Minister Theresa May remains the favourite over Labour leader Jeremy Corbyn.
AFP

LONDON - Prime Minister Theresa May is poised to win Britain's snap election but lose her parliamentary majority, a shock exit poll suggested Thursday, in what would be a major blow for her leadership as Brexit talks loom.

The ruling Conservatives were predicted to fall from 330 to 314 seats, short of an overall majority in the 650-seat House of Commons, after a troubled campaign overshadowed by two deadly terror attacks.

The main opposition Labour party, led by leftist Jeremy Corbyn, was on course to increase its number of seats from 229 to 266, according to the joint exit poll by Sky, the BBC and ITV.

The election comes at a pivotal time in British history as it negotiates a complicated exit from the European Union, the first country to leave the bloc.

The pound immediately tumbled down 1.5 per cent from the day-before level, amid speculation that May would now struggle to govern.

Formal Brexit talks are due to open around June 19, but there are now questions over whether May will still even in office by then.

"It's a disaster for Theresa May," said Iain Begg, a professor of politics at the London School of Economics (LSE).

"Her leadership will be called into question and she will be under pressure to resign if these results stay as they are.

"This is going to disrupt British politics quite fundamentally."

Newcastle in northeast England was the first seat to declare its result -- a hold for Labour -- but the picture is not likely to become clear until early on Friday morning.

The exit poll predicts the pro-European Liberal Democrats, who have campaigned for a second referendum that could keep Britain in the EU, would increase their seats from nine to 14.

In Scotland, where First Minister Nicola Sturgeon has called for independence to avoid a "hard Brexit", her Scottish National Party was tipped to lose up to 20 of its 54 seats.

May had warned repeatedly during the campaign that if she lost only a few seats then Corbyn could take office, presiding over a "coalition of chaos" involving the SNP and Lib Dems.

It seemed an empty threat when she called the election in April, when her popularity was running high, Labour was plagued by divisions and Corbyn's personal ratings were at rock bottom.

But May's botched announcement of a reform in funding for elderly care, a strong grassroots campaign by Corbyn and the terror attacks, which increased scrutiny of her time as interior minister, changed the game.

"If these figures are correct, it will be difficult to govern," said Wyn Grant, politics professor at the University of Warwick.

May has said victory in the election would strengthen her hand in Brexit negotiations, and officials in Brussels were hopeful it will allow her to make compromises in the talks.

But the prospect of a hung parliament, where no party has an overall majority, has raised further uncertainty.

"A hung parliament is the worst outcome from a markets perspective as it creates another layer of uncertainty ahead of the Brexit negotiations and chips away at what is already a short timeline to secure a deal for Britain," said Craig Erlam, senior market analyst at OANDA currency traders.

May, who took over after last year's Brexit referendum, began the formal two-year process of leaving the EU on March 29.

She wants to take Britain out of Europe's single market in order to control immigration -- but has warned that Britain could withdraw with no deal than accept unsatisfactory terms.

Despite campaigning against Brexit, Labour has accepted the result but promised to avoid a "hard Brexit", focusing on maintaining economic ties with the bloc.

Early obstacles include the divorce bill, put by one estimate at up to 100 billion euros ($112 billion), and the status of EU citizens living in Britain and Britons living elsewhere in the EU.

May sharpened her rhetoric on the campaign trail and boasted she would be a "bloody difficult woman" in Brussels, saying that "no deal is better than a bad deal".

But the vicar's daughter was criticised for a robotic performance on the campaign trail, and will now face serious questions about her decision to call the vote three years early, putting at risk the Conservatives' 17-seat majority.

Terror in the campaign

Britain has been hit with three terror attacks since March, and campaigning was twice suspended.

A suicide bomber blew himself up outside a pop concert in Manchester on May 22, killing 22 people.

The attacks led to scrutiny over May's time as interior minister from 2010 to 2016, particularly since it emerged that some of the attackers had been known to police and security services.

Labour seized on radical cuts in police numbers implemented as part of a Conservative austerity programme, although May insisted that she had protected funding for counter-terrorism.

At a polling station in Hackney in east London, a Labour stronghold, 41-year-old Simon Bolton said he had favoured May because he was confident that she would get the "best possible deal for Brexit".

But voters who supported the Labour party said they were concerned about the impact of seven years of austerity on the National Health Service (NHS) and schools.

"The Tories have just been devastating,", said Ben Thomas Smetton, a 28-year-old doctor voting in a building near the scene of last Saturday's terror attack.