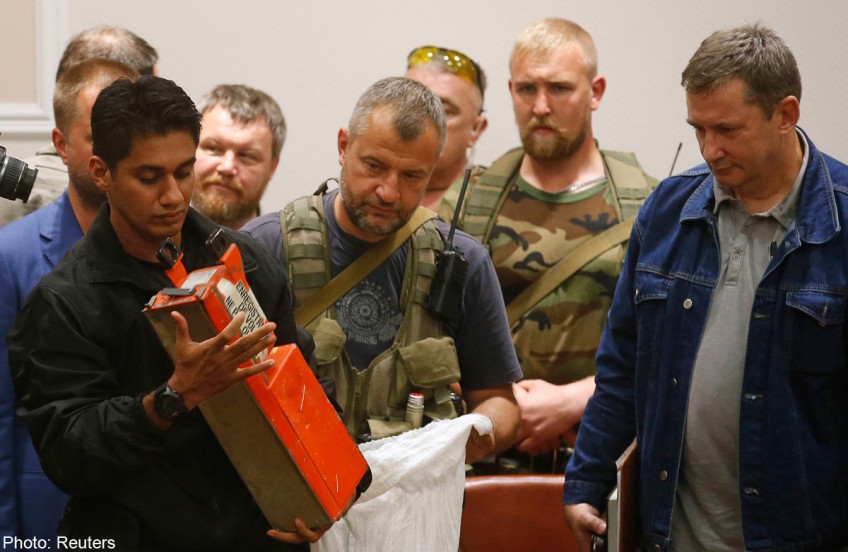 DONETSK, Ukraine - Pro-Russian separatists in eastern Ukraine on Tuesday handed over two black boxes recovered from the crash site of the MH17 jet to Malaysian officials at a press conference.

They also announced a ceasefire within a 10-kilometre radius around the crash site to allow international investigators to safely access the vast area where the Malaysia Airlines flight was downed Thursday.

"We have decided to hand the black boxes over to Malaysian experts," the prime minister of the self-proclaimed Donetsk People's Republic, Alexander Borodai, told journalists.

The Malaysian team of experts and representatives of the separatist group then signed a protocol before the bright orange boxes were handed over.

"We have not found the black boxes from flight MH370 (disappeared over the Indian Ocean in March), so are happy to be able to recover these.

"I see that the black boxes are intact with only minor damage."

One of the boxes will contain all conversation in the cockpit and another all flight data.

However, it is unclear how useful this will be in determining what happened to the flight, which is believed by Kiev and world leaders to have been shot down by a surface-to-air-missile.

The Russia-backed separatist rebels who control the area where the plane went down are suspected of having fired the missile, but they put the blame on the Ukrainian military.

There has been an outpouring of global outrage over lack of access to the site, and fears the rebels have tampered with evidence.

Borodai gave in to demands for a ceasefire to allow investigators full access to the site.

"We will order a ceasefire in a area of 10 kilometres around" the site of the disaster, which left 298 people dead, he said.

Malaysian officials were accompanying a refrigerated train transporting the remains of the passengers to the town of Kharkiv, controlled by the government in Kiev.