UN chief alarmed at 'excessive use of force' in Egypt 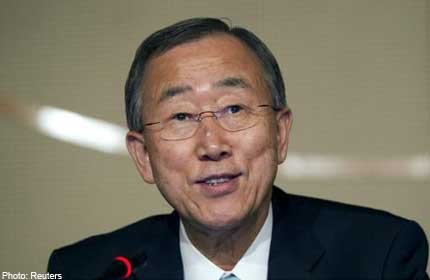 UNITED NATIONS - UN Secretary General Ban Ki Moon expressed alarm at the turmoil in Egypt on Saturday, urging an end to violent protests and citing the "excessive use of force" in handling them.

"He strongly condemns attacks on churches, hospitals, and other public facilities, which he finds unacceptable," Mr Ban's spokesman said in a statement.

"Whatever the grievances, there is no justification for destruction of infrastructure and property so important to Egypt's future." Egyptian police cleared Islamist protesters from a Cairo mosque on Saturday after a standoff that included exchanges of fire, as the death toll from four days of violence surpassed 750.

Security forces dragged supporters of deposed president Mohamed Mursi from the Al-Fath mosque, passing through angry crowds who tried to beat the Islamists, calling them "terrorists".

Mr Ban's statement said that preventing further loss of life should be Egyptians' "highest priority at this dangerous moment".

"He urges those in the street and those in authority to use maximum restraint and shift immediately to de-escalation.

"He appeals to the authorities and to the political leaders to adopt a credible plan to contain the violence and revive the political process hijacked by violence," it added.