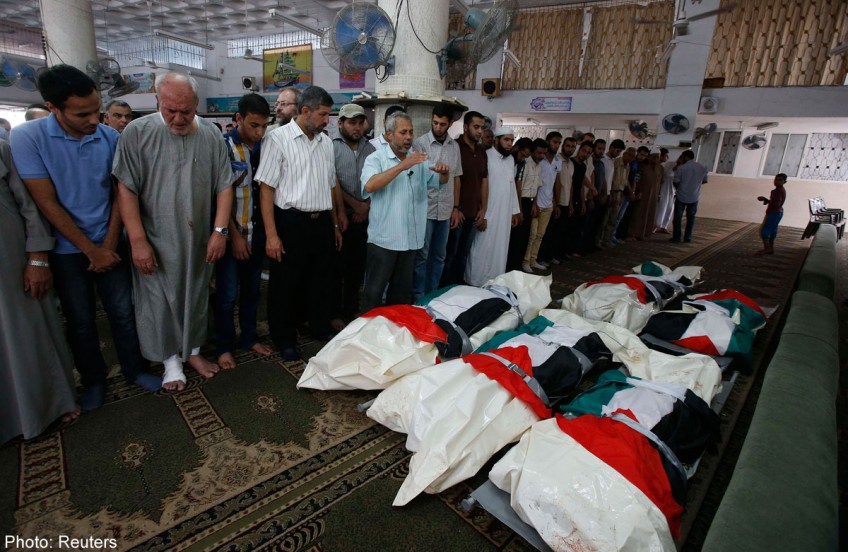 Palestinians pray next to the bodies of eight members from al-Halaq family, who medics said were killed in an Israeli air strike on Sunday.

GENEVA - The UN Human Rights Council said it will hold an extraordinary meeting on Wednesday to discuss Israel's ongoing military offensive in Gaza.

Monday's announcement followed the deadliest day of fighting between Israel and Hamas in six years, with more than 150 Palestinians and 13 Israeli soldiers killed on Sunday.

The meeting was requested by Egypt on behalf of Arab states, as well as Pakistan on behalf of the the Organisation of Islamic Cooperation, and the Palestinians.

The UN Security Council held an emergency session on the Gaza conflict on Sunday and appealed for an immediate ceasefire.

So far, Palestinian figures show 509 Gazans have been killed and more than 3,150 wounded since the start of the Israeli campaign to stamp out cross-border militant rocket fire on July 8. On the Israeli side, 20 people have died, including two civilians.

Israel has repeatedly locked horns with the rights council - a 47-nation body whose make-up rotates among members of regional groups within the United Nations - accusing it of bias.