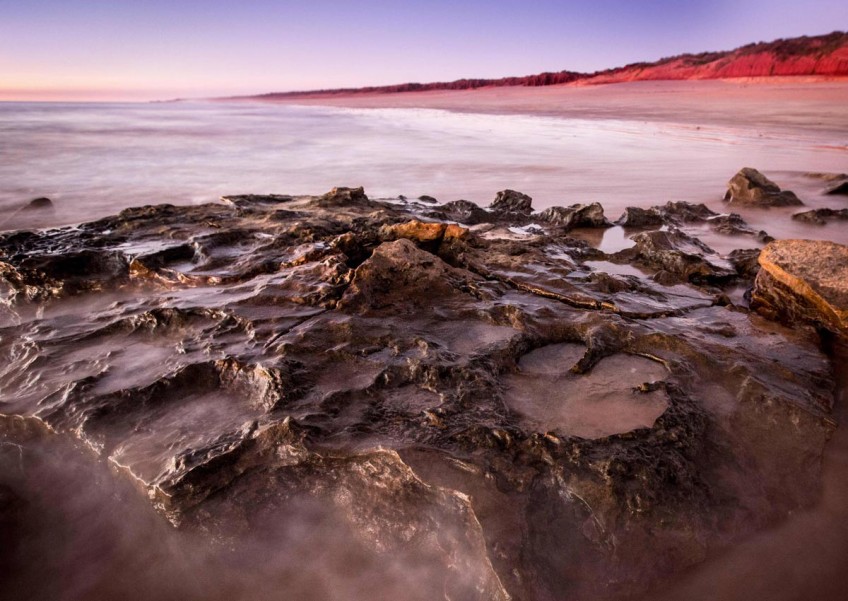 SYDNEY - An "unprecedented" 21 different types of dinosaur tracks have been found on a stretch of Australia's remote coastline, scientists said Monday, dubbing it the nation's Jurassic Park.

Palaeontologists from the University of Queensland and James Cook University said it was the most diverse such discovery in the world, unearthed in rocks up to 140 millions years old in the Kimberley region of Western Australia.

Steve Salisbury, lead author of a paper on the findings published in the Memoir of the Society of Vertebrate Paleontology, said the tracks were "globally unparalleled".

"It is extremely significant, forming the primary record of non-avian dinosaurs in the western half of the continent and providing the only glimpse of Australia's dinosaur fauna during the first half of the Early Cretaceous Period," he said.

"It's such a magical place - Australia's own Jurassic Park, in a spectacular wilderness setting."

He added: "Among the tracks is the only confirmed evidence for stegosaurs in Australia. There are also some of the largest dinosaur tracks ever recorded."

It was almost lost, with the Western Australian government in 2008 selecting the area as the preferred site for a massive liquid natural gas processing precinct.

Alarmed, the region's traditional Aboriginal custodians, the Goolarabooloo people, contacted Salisbury and his team to officially research what they knew was there.

They spent more than 400 hours investigating and documenting dinosaur tracks in the Walmadany area.

"We needed the world to see what was at stake," Goolarabooloo official Phillip Roe said, explaining the dinosaur tracks formed part of a songline that extends along the coast and then inland, tracing the journey of a Dreamtime creator being called Marala, the Emu man.

Aboriginal Australians have developed and are bound by highly complex belief systems - known as the Dreamtime - that interconnect the land, spirituality, law, social life and care of the environment.

A songline is one of the paths across the land which mark the route followed by localised "creator-beings", stories that have been handed down through the generations.

"Marala was the Lawgiver. He gave country the rules we need to follow. How to behave, to keep things in balance," Roe said.

The area was eventually awarded National Heritage status in 2011 and the gas project subsequently collapsed.

"There are thousands of tracks around Walmadany. Of these, 150 can confidently be assigned to 21 specific track types, representing four main groups of dinosaurs," Salisbury said.

Most of Australia's dinosaur fossils have previously come from the eastern side of the vast country.