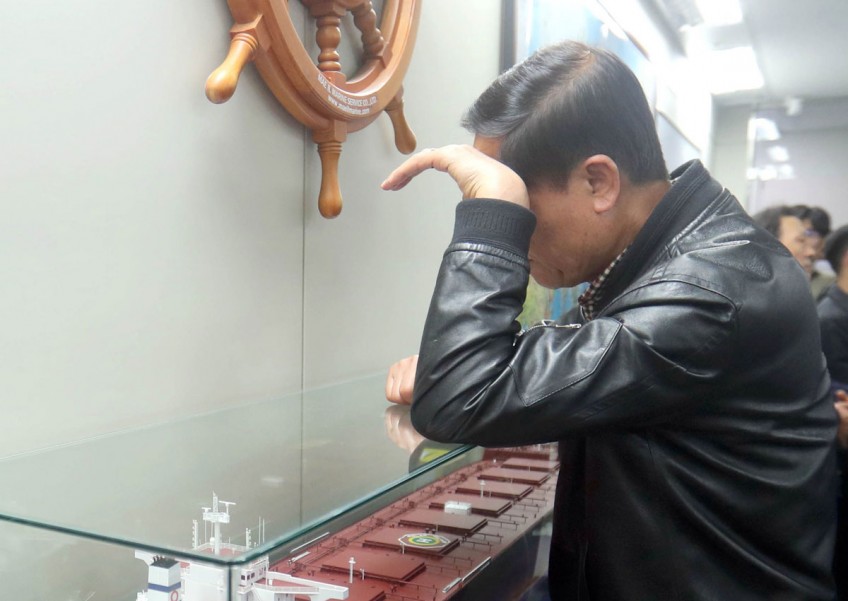 A relative of a missing crew member on board the Stella Daisy cargo ship waits for news beside a scale model display of a ship in the Polaris Shipping fleet, at one of the company's offices in the southern port city of Busan on April 2, 2017.
AFP

MONTEVIDEO - Uruguay's navy said on Sunday it was losing hope of finding alive any of 22 crew members missing two days after a South Korean ore carrier sank in the South Atlantic but was still continuing the search, a Navy spokesman said.

Two Filipino crew members have been rescued floating in a life raft on Saturday, but other lifeboats and rafts found in the area were empty, South Korea's Yonhap news agency reported.

"The more hours pass, the less the chances are of finding them," spokesman for the Uruguayan Navy Gaston Jaunsolo told Reuters.

He said a Brazilian plane had flown over the area on Sunday morning and an Argentine war ship was due to join the search efforts.

Eight of the missing are South Korean nationals and 14 are Filipinos.

The very large ore carrier (VLOC) Stellar Daisy owned and operated by South Korea's Polaris Shipping based in Busan was sailing from Brazil to China carrying iron ore when it sent a distress signal to the ship operator on Friday, South Korea's Yonhap news agency reported.

A message last received on Friday by Polaris from a crew member said the ship was taking in water on the port side and was listing rapidly, Yonhap said.