US admiral takes blame for N.Korea fiasco: Ships supposed to sail north from Singapore but went south instead

WASHINGTON - The US admiral who ordered an aircraft carrier and other warships toward the Korean Peninsula in a much-hyped deployment took responsibility Wednesday for any "confusion" after the ships sailed in the opposite direction.

Amid soaring tensions ahead of North Korea's apparent ramping up for a sixth nuclear test, the US Navy on April 8 said it was directing a naval strike group headed by the USS Carl Vinson carrier to "sail north" from the waters off Singapore, as a "prudent measure" to deter Pyongyang.

But the ships actually went the other way, sailing south from Singapore and toward Australia to conduct drills with the Australian navy -- though they subsequently did turn north.

"That's my fault on the confusion and I'll take the hit for it," Admiral Harry Harris, who heads the US military's Pacific Command, told lawmakers. 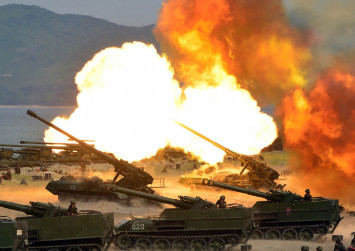 "Where I failed was to communicate that adequately to the press and the media, so that is all on me."

Noting that the ships had eventually gone on to sail toward the Korean Peninsula, Harris said they are still en route.

"Today (the strike group) sits in the Philippine Sea just east of Okinawa in striking range and power projection range of North Korea if called upon to do that, and then in a few days I expect it will continue to move north," he told the House Armed Services Committee.

The eventual arrival of the strike group in the region is a far cry from the impression President Donald Trump and other officials left when the deployment was first announced.

"We are sending an armada. Very powerful," were the words of President Donald Trump, and other officials made it sound like the ships were plowing toward the region.

"A carrier group steaming into an area like that, the forward presence of that is clearly... a huge deterrent. So, I think it serves multiple capabilities," White House spokesman Sean Spicer said April 11.

Pentagon chief Jim Mattis said the Vinson was "on her way up."

"Such threat may startle a jellyfish, but can never work on the DPRK," it said, using the country's official name.