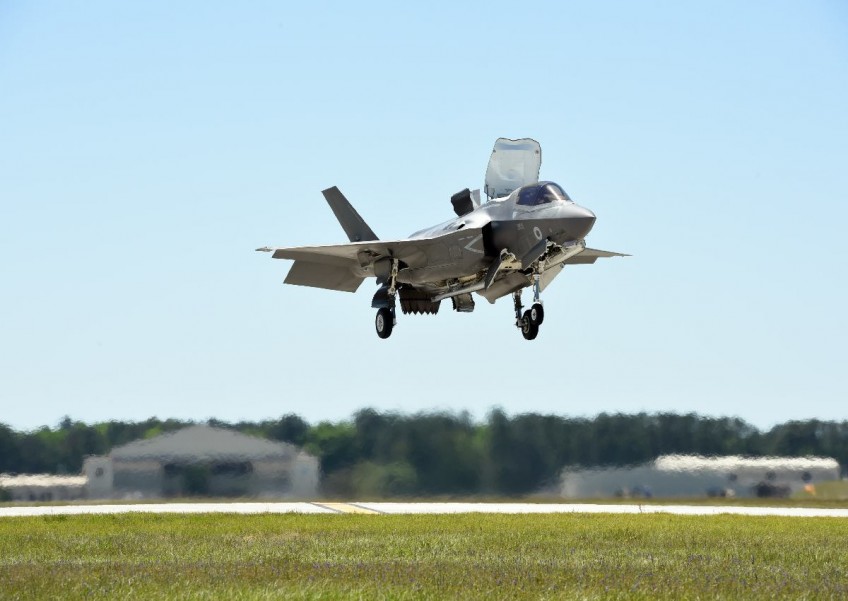 The F35-B variant is parked in the hanger of the US Marine Air Corps Air Station (MCAS) in Beaufort, South Carolina on 18 April 2016.
The Straits Times

General Hawk Carlisle, commander of U.S. Air Force Combat Command, said preparations for the declaration were going "exceptionally well," and a decision should be announced soon.

He said he hoped to certify an "initial operational capability" or IOC of F-35 jets at the early end or "leading edge" of an August-to-December time frame set by the Air Force several years ago. He declined to say if the move would happen by Aug. 1, the target set by the Pentagon's F-35 chief.

He said delays in completion of the latest software for the F-35's computerized logistic system were "not a limiting factor"in his decision, since the current software worked during a recent test deployment from one Air Force base to another.

The new software package for the jet's Autonomic Logistics Information System, or ALIS, is now expected to be completed in October or November, instead of August as expected, but Carlisle said the current version was sufficient to support a deployment. "There's nothing really red that's really limited us at all," Carlisle told reporters, referring to the U.S. military's practice of using traffic-light symbols to help evaluate risks to programs. "I'm very confident in this airplane, and where we're heading," he added.

Carlisle, speaking on the eve of the Royal International Air Tattoo, the world's largest military air show, said he was pleased by the aircraft's performance during a deployment to the second air base. The jets carried out all 88 missions planned during the deployment, he said.

Jeff Babione, Lockheed's F-35 programme manager, said the decision was up to the Air Force, but Lockheed had delivered the airplanes required for the first operational squadron.

The U.S. Marine Corps declared its first squadron of radar-evading F-35 fighter jets ready for combat a year ago.

Carlisle said the IOC declaration meant the Air Force could use the jets for combat deployments to the Middle East or elsewhere if needed.

He said the Air Force planned to continue rotating its F-22 fighter jets and other assets, including the F-35 fighter jet, through Europe. An initial deployment for the F-35 was likely planned in fiscal 2017, he said.