US high school slammed for using live tiger in prom 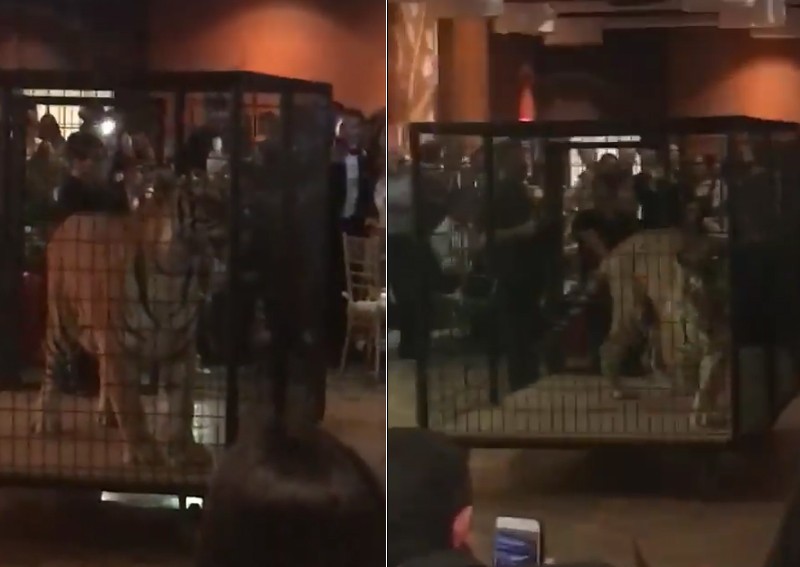 An all-boys Catholic school in Florida caused an uproar by taking its "Welcome to the jungle" prom theme too far last Friday (May 11).

The venue was decorated like a wild safari camp with faux rock walls, fake snakes and foliage.

When a caged tiger was wheeled onto the dance floor, students of Christopher Columbus High School and their dates started to shout in excitement.

Fire dancers dressed in tiger-striped bodysuits then juggled flames before the big cat.

But many people were not amused by the performance after photos and video clips of the event were posted on Facebook.

The tiger could be seen pacing frantically in the small cage with flattened ears - signs that the animal was in distress.

"This tiger's not having a party; this tiger is being stressed out," Zoo Miami spokesman Ron Magill told Washington Post.

Yet the school claimed that the animal was unharmed.

It told the Miami Herald: "The tiger, which was displayed for a few minutes in a cage was never harmed or in danger, was not forced to perform, was always accompanied by his handlers."

The explanation, however, was not taken well by the public who slammed the school for the act of animal cruelty.

Mari-Chris Castellanos, the sister of a student who attended the prom, wrote on Facebook: "The tiger was used as an exotic amusement for the mindless teenagers who were present."

Besides the big cat, school officials confirmed that a lemur, two macaws, and a fennec fox were used as photo props at the dance.

After incurring public wrath over the weekend, the school issued a statement on Monday (May 14), in which principal David Pugh wrote: "As a school community, we regret the decision to have had live animals at our prom."

"We can assure the Columbus community and all who have expressed concern, that we are sorry. We have learned a great deal from this experience."

The apology, however, did not appease angry netizens who called for action to be taken against organisers of the prom dance, as well as the owner of the wild animals.

One Facebook user wrote: "What are you teaching your students? The tiger was so stressed and fearful."

Looks like someone is in need of some schooling on animal welfare.