US probes spike in dolphin deaths off East Coast 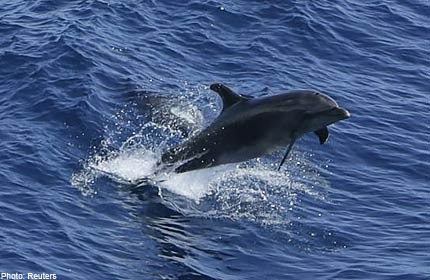 Carcasses of bottlenose dolphins are washing up on United States East Coast beaches from New Jersey to Virginia at a higher than normal pace.

WASHINGTON - More than 124 bottlenose dolphins have washed up along the Atlantic coast since July, a startling number that has prompted US officials to launch an investigation into the mysterious deaths.

Scientists are working to find out if an infectious pathogen may be to blame since some of the dolphins appeared to have lesions in their lungs.

An "unusual mortality event" has been declared due to the "unexpected and significant die-off" that has spanned the coasts of New York, New Jersey, Delaware, Maryland and Virginia since early July, said the National Oceanic and Atmospheric Administration's (NOAA) Fisheries unit.

Eighty-nine were found in July and another 35 have washed up so far this month.

"Several dolphins have presented with pulmonary lesions," NOAA said in a statement.

"Preliminary testing of tissues from one dolphin indicates possible morbillivirus infection, although it is too early to say whether or not morbillivirus may be causing this event."

However, NOAA scientists say an "infectious pathogen is at the top of the list of potential causes."

Morbillivirus is similar to a marine mammal form of distemper, which in dogs attacks the central nervous system and causes breathing problems, vomiting, diarrhoea, brain swelling and often death.

Most of the dolphins were already dead when they were found, scientists said. A small number have been stranded alive, only to die soon after.

Typically an average of seven dolphins wash up in Virginia in July, so the 45 animals found last month is a significant increase.

"It is an important issue," said NOAA spokesman Connie Barclay.

The last time morbillivirus was implicated in a mass dolphin die-off was in 1987-1988 when more than 740 bottlenose dolphins died from New Jersey to Florida.

According to the Virginia Aquarium and Marine Science Centre, which has been collecting and studying the dolphin carcasses, most of them have been male.

Spokesman Linda Candler told AFP they have been found in "all conditions from very fresh to badly decomposed, all ages and sizes." She added that a dolphin that had recently died came in for analysis on Thursday and samples were sent off for analysis, which may take up to two weeks.

Other potential causes for mass dolphin deaths could include stormy weather, ship strikes or pollution.

Scientists "don't want to speculate, but the researchers feel comfortable in saying they do not believe that this is a result of human interaction, that it is some sort of biological event," Ms Candler said.

If it is a disease, there is little that wildlife officials can do, she added.

"It has to run its course," Ms Candler said. "You can't immunise a wild population, unfortunately."