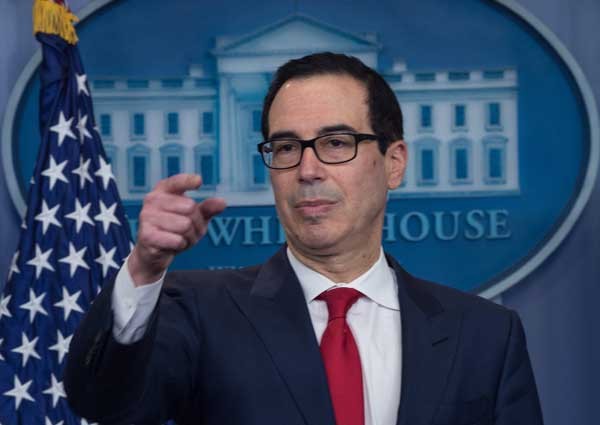 US Treasury Secretary Steve Mnuchin speaks during the press briefing at the White House in Washington, DC, on June 29, 2017. The US Treasury Department on Thursday slapped sanctions on a Chinese bank over illicit activities in North Korea, including facilitating the production of weapons of mass destruction.
AFP

As South Korea's new president visited Washington, the Treasury Department announced the Bank of Dandong would be severed from the US financial system for acting "as a conduit for illicit North Korean financial activity."

And while Treasury Secretary Steven Mnuchin said the move was not targeted at China's government, it is likely to infuriate Beijing, which says it has been unstinting in its efforts to ease tensions with North Korea.

The announcement came on the same day that it emerged the Trump adminisration had approved US$1.3 billion (S$1.8 billion) in arms sales to Beijing's archrival Taiwan and as the State Department voiced concerns about basic freedoms in Hong Kong under Chinese rule.

Since early in his administration, Trump has pushed China to do more to rein in the North Korean regime and its leader Kim Jong-un.

However, he raised eyebrows last week when he thanked his Chinese counterpart Xi Jinping for Beijing's help but then concluded that Xi's efforts had "not worked out." Trump did not spell out what he intended to do next.

The Treasury announcement said Dandong had been identified as "a foreign bank of primary money-laundering concern" that had been "facilitating millions of dollars of transactions for companies involved in North Korea's WMD (weapons of mass destruction) and ballistic missile programs."

The bank will now be prevented from having accounts or doing business with US financial institutions.

"This is not directed at China, this is directed at a bank, as well as individuals and entities in China," Mnuchin told reporters.

But he warned that Treasury will "follow the money" and take action where needed to cut off illegal finance.

"If we find other activity, we will sanction other entities. Nobody's off limits." China, which borders North Korea and is considered its only major ally, argues that negotiations are the best way to persuade Pyongyang to halt its nuclear and missile activities.

Moon was due to dine with Trump on Thursday night, after meeting earlier with Congressional leaders as he pushes his policy of engagement with the North.

Speaking to reporters on his flight to the US, Moon said Seoul and Washington should offer concessions to Pyongyang if it complies with their demands, according to multiple South Korean reports.

"Without rewarding North Korea for its bad actions, South Korea and the United States should closely consult what they may give the North in return for a nuclear freeze," he said.

'To change their calculus'

Speaking alongside Moon in Congress, House Speaker Paul Ryan told reporters that the US and South Korea "shared concerns" about North Korea.

Moon responded by saying that when it comes to humanitarian issues, "we must cross boundaries and all party lines, and all try to unite together as one." Trump has been pushing for tougher sanctions against Pyongyang to curb its nuclear ambitions. His administration has said military action was a possibility.

But US officials have played down the idea that Washington and Seoul are at odds over their approach, with one senior administration official insisting Thursday that they "share precisely the same goal, which is the complete dismantlement of North Korea's nuclear and missile programs."

Trump was heaping economic and diplomatic pressure on Pyongyang "in order to change their calculus," the official said.

'No evidence' of reduced threat

"Right now we see no evidence that they are seeking to reduce the threat from nuclear weapons or ballistic missile technology."

When Trump and Moon hold formal talks on Friday, they are likely to discuss a controversial US missile defence system that has been set up in South Korea to guard against missile threats from the North.

Though parts of the Terminal High-Altitude Area Defence (THAAD) system are already in place, Moon suspended further deployment following a furious campaign of economic sanctions and diplomatic protests by Beijing.

Some analysts believe the Chinese see the system as part of a long-range US effort to contain China.