US shutdown: How to fix the GOP's discipline problem 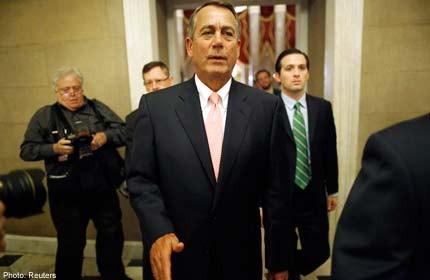 As the government shutdown grinds on, the Republican leadership in the House is struggling to unite GOP lawmakers around a fiscal deal that Senate Democrats and the Obama administration would be willing to accept.

Speaker John Boehner has reportedly said that he is willing to rely on Democratic votes if necessary to pass an increase in the debt ceiling. Yet he also insists that he will fight for spending cuts and entitlement reform in any debt ceiling bill, in a nod to conservative members who are convinced that he is eager to sell them out.

Whether or not Boehner succeeds, it is increasingly difficult to deny that the Republican negotiating position is being constrained if not dictated by a small minority of 30 or so members from safe seats who seem largely indifferent to leadership demands, or rather leadership requests.

The result is that the much-derided Republican establishment is in a state of panic, sensing that GOP intransigence will lead the party to squander the political opportunity created by the president's declining fortunes and the persistent unpopularity of Obamacare. How has party discipline broken down to this extent, and what, if anything, can Republicans do to restore it?

First, it is important to recognise that this chaotic confrontation wasn't supposed to happen. At the start of the year, congressional Republicans seemed eager to return to regular order, in which, essentially, the House majority brokers with the Senate majority to pass legislation, which the president can then sign or veto.

Yuval Levin, writing for National Review Online, argued that for the right, the central political problem with the endless succession of fiscal showdowns is that they inevitably made the president, as a unitary figure, look better than the often-fractious House Republican conference.

Regular order, in contrast, would demand that Senate Democrats put up or shut up by codifying their commitments, not all of which are popular in hotly-contested states, in real legislation. House Republicans and Senate Democrats would be on a relatively level playing field, while the president would be relegated to the sidelines.

But the regular order strategy didn't come to fruition, both because Senate Democrats were reluctant to play along and because a determined minority of House Republicans couldn't reconcile themselves to the fact that the ordinary legislative process left them with very little leverage.

Which leads us back to party discipline. Boehner, House Majority Leader Eric Cantor and other members of the GOP leadership team couldn't compel their most recalcitrant members to steer clear of confrontation because they had very little to offer them.

Traditionally, party leaders would use the appropriations process to cut deals with members. The main tool for these deals was the legislative earmark, which directs the federal government to spend money in particular ways.

Earmarks have never represented a large share of appropriations, but they long helped ensure that legislators can achieve tangible, narrowly-defined policy goals that can help burnish their political credentials.

Over time, however, the earmarking process fell into bad odour, as it came to be associated with expensive, wasteful projects, like Alaska's notorious "Bridge to Nowhere."

To demonstrate their anti-spending zeal, Republicans banned earmarks after winning control of the House in 2010. One heretical idea, which Rep. Mike Rogers (R-AL) floated last spring, is that Republicans should bring earmarks back.

As Steven LaTourette, a moderate Ohio Republican and former House member, explained to Richard Cowan of Reuters in 2012, "you can't get 218 votes (out of 242 Republican House members) and part of that has to be if you can't give people anything (earmarks), you can't take anything away from them."

The problem with restoring earmarks is that legislative deals that were once made in dark corners of the Capitol are now made in full view of the public. Even before the earmark ban, GOP lawmakers were growing wary of using them, as doing so risked raising the ire of more ideologically-minded Republicans.

It is easier to imagine Republican rebels representing safe seats boasting of their willingness to swear off earmarks than boasting of having brought home the bacon, not least because their most realistic political threats are from conservative primary challengers.

A more effective strategy for restoring party discipline would be to actually strengthen political parties, which have been sapped of their importance by onerous campaign finance regulations that empower candidates who can build their own fundraising networks.

In Better Parties, Better Government [6], Peter Wallison and Joel Gora explain that while most countries have party-centred campaign-finance systems, in which parties do the heavy lifting of raising funds, the US has a candidate-centred system, which benefits incumbents at the expense of challengers and wealthy candidates over less-wealthy candidates.

It also forces elected officials to spend inordinate amounts of time fundraising rather than doing their jobs. Indeed, some influential conservatives, including Kim Strassel of the Wall Street Journal, have suggested that the recent effort to defund Obamacare has been little more than a fundraising ploy.

Giving parties a more central role in fundraising - allowing them more leeway to finance campaigns directly - would encourage a more competitive political system, as it would aid promising candidates who have neither the time nor the inclination to build fundraising networks of their own.

And it would also give the party leadership more leverage over members. When members of the party are damaging its reputation in swing districts, the central party organisation could nudge them towards considering the interests of the party as a whole.

In theory, Americans admire my-way-or-the-highway mavericks, who are willing to stick up for their principles regardless of the cost. But in practice, unyielding ideologues make it very difficult for a legislature to function, as is becoming painfully clear in this fiscal showdown.

PHOTO: US House Speaker John Boehner (R-OH) returns to his office at the US Capitol in Washington September 30, 2013.