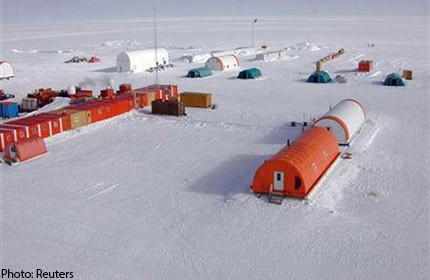 WELLINGTON - The government shutdown in Washington has forced US bases half a world away in Antarctica into "caretaker" mode and the suspension of research efforts, the National Science Foundation (NSF) said Wednesday.

In an unprecedented development that scientists described as "tragic", the US-based NSF said funds to provide logistical support for the US Antarctic Program (USAP) will dry up early next week and contractors have been ordered to scale back operations.

The US has three Antarctic bases studying topics ranging from climate change to penguin populations.

But all research in coming months - the busiest period for scientists when conditions are at their least extreme - will be abandoned, the NSF said.

"Under caretaker status, the USAP will be staffed at a minimal level to ensure human safety and preserve government property, including the three primary research stations, ships and associated research facilities," the NSF said in a statement.

"All field and research activities not essential to human safety and preservation of property will be suspended."

It is believed that non-essential personnel will be transported to the USAP's support base in Christchurch, New Zealand, while the funding freeze continues.

"The loss of this season's programmes, some planned over many years, is unprecedented and tragic for both the Antarctic community and our understanding of the Antarctic region and its changing environment," he said.

The NSF said it would do its best to resume research programmes when funding was eventually restored but conceded this would not be possible in every case.

"It is important to note, however, that some activities cannot be restarted once seasonally dependent windows for research and operations have passed," it said.

Antarctica New Zealand, a government body which oversees New Zealand's activities in the region, said the situation would have a "minimal impact" on its research.

However, University of Waikato researcher Charles Lee said scientific efforts on the frozen continent were a collaboration between nations and there would inevitably be a knock-on effect for all scientists who work with the Americans.