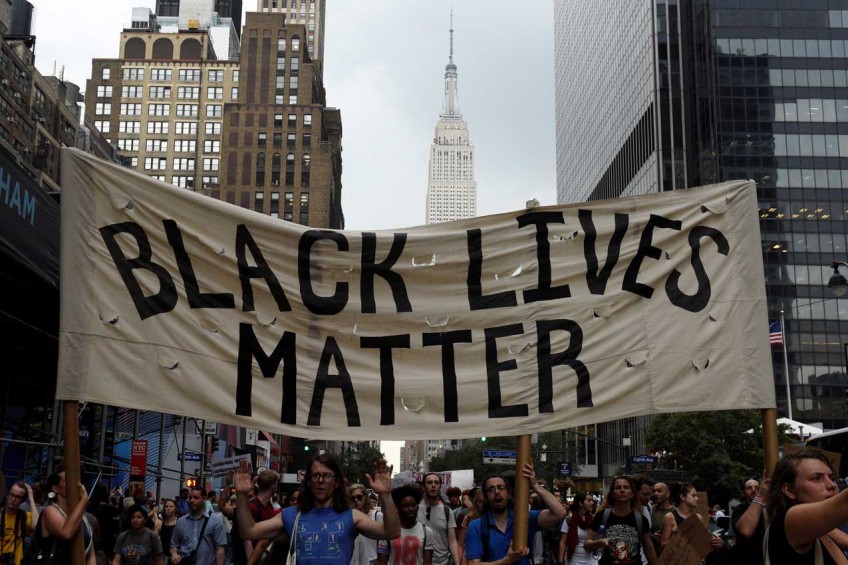 People take part in a protest against the killings of Alton Sterling and Philando Castile during a march through Manhattan, with the Empire State Building seen in the background, in New York July 7, 2016.
Reuters

SAINT PAUL - US President Barack Obama made an emotional appeal for urgent police reform after the fatal shootings of two black men by police, as protests over the deaths erupted Thursday in major cities across the country.

The deaths this week of Alton Sterling in Louisiana and Philando Castile in Minnesota - both caught on video - are once again fueling a debate about police use of lethal force, especially against African-Americans.

Castile's girlfriend Diamond Reynolds livestreamed the aftermath of Wednesday night's shooting in a Saint Paul suburb with an officer pointing his gun at her through the window as her four-year-old daughter sat in the back of the car.

The 10-minute video - which shows Castile bleeding out - prompted widespread outrage and has been viewed millions of times after it was posted on Facebook.

Obama, America's first black president, said it was clear the shootings were not "isolated incidents." "They are symptomatic of the broader challenges within our criminal justice system, the racial disparities that appear across the system year after year, and the resulting lack of trust that exists between law enforcement and too many of the communities they serve," he said in a statement on Facebook.

Obama urged Americans to work together to heal the divisions, while making clear that police officers should not be blamed wholesale.

"To admit we've got a serious problem in no way contradicts our respect and appreciation for the vast majority of police officers who put their lives on the line to protect us every single day," he said.

"When people say black lives matter, it doesn't mean blue lives don't matter," he said upon arrival in Poland for a NATO summit, referring to the color of uniforms worn by American police officers.

"It's incumbent on all of us to say we can do better than this." "This is not just a black issue. It's not just a Hispanic issue," he said. "This is an American issue that we should all care about." Dozens of protesters - mostly young people - blocked traffic on a highway in Chicago. They marched with arms linked, chanting: "It is our duty to fight for our freedom. It is our duty to win. We must love and support each other. We have nothing to lose but our chains." About a thousand protesters clogged New York's iconic Times Square, at one point staging a sit-in. Police arrested some of them, loading them onto city buses they borrowed for the occasion.

Another thousand rallied in Washington at the White House, then marched to the US Capitol where veteran civil rights leader Congressman John Lewis stood on the steps and addressed the crowd through a bullhorn.

In Minnesota, a visibly upset Governor Mark Dayton said Thursday there was "every indication" that police conduct in the Castile case was "way in excess" of what the situation warranted, and that race may have played a role.

"I can't say how shocked I am and how deeply, deeply offended that this would occur in Minnesota to somebody who got pulled over for a tail light being out of order," he told reporters, calling the situation "absolutely appalling." "Would this have happened if those passengers, the driver and the passengers, were white? I don't think it would have," Dayton said.

"So I'm forced to confront, and I think all of us in Minnesota are forced to confront, that this kind of racism exists." Dayton has urged a federal civil rights probe into the shooting, similar to the one launched in Louisiana over the death of Sterling, a 37-year-old father of five.

Speaking to reporters outside the governor's mansion after a night in police custody, Reynolds repeated what she said in the gruesome footage: that Castile was shot "for no reason." After he was pulled over, Castile duly informed the officer that he possessed a licensed gun, she said - and was shot as he reached for his wallet to retrieve his identification.

Castile, a 32-year-old school cafeteria worker described by relatives as a quiet, law-abiding citizen, had made no threat, Reynolds said.

She said the officer, whom she described as an Asian male, made conflicting demands - telling Castile both to keep his hands in the air and identify himself.

Reynolds said she livestreamed the event to forestall any attempt by police to deny what happened.

"They're here to assassinate us, they're here to kill us because we are black." Reynolds said her phone had been seized as evidence and voiced fear of a police cover-up.

In the video methodically narrated by Reynolds, Castile can be seen in the driver's seat, blood stains spreading through his white shirt.

At the end of the video, as she sits crying in the back of a police car, Reynolds's daughter can be heard telling her: "It's OK, Mommy. It's OK, I'm right here with you." Although the victims in both the Minnesota and Louisiana cases had guns in their possession, there is no indication they pointed their weapons at police.

On Tuesday in Louisiana, Sterling was pinned to the ground and shot multiple times at point blank range.

Baton Rouge police said they had responded after an anonymous caller reported being threatened by a man with a gun. Sterling's family lawyer said he was merely selling CDs outside a convenience store.

A GoFundMe campaign has so far raised more than $500,000 for Sterling's children.