CHICAGO - Doctors treating Otto Warmbier, the US student released by North Korea in a coma this week, said Thursday the 22-year-old had suffered severe brain damage, as his father lashed out at the reclusive regime.

Warmbier experienced extensive tissue loss in all regions of the brain, doctors said, but he showed no signs of physical trauma and medical tests offered no conclusive evidence as to the cause of his neurological injuries.

His father, Fred Warmbier, hit out at Kim Jong-Un's authoritarian state which kept the family in the dark, with little to no news for much of the young man's imprisonment.

It was only a week ago, after a US diplomatic effort, that they were told he had been in a coma since shortly after being incarcerated in March 2016 for stealing a political poster from a hotel. 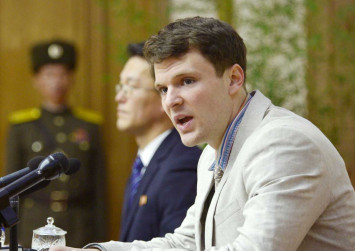 "Even if you believe their explanation of botulism and a sleeping pill causing the coma - and we don't," Warmbier told a news conference earlier Thursday in the family's home city of Cincinnati, Ohio, "there is no excuse for any civilised nation to have kept his condition secret and denied him top-notch medical care for so long."

"I call on them to release the other Americans being held," he urged, referring to three US citizens still in North Korea.

Doctors at the UC Health University of Cincinnati Medical Center said the young man was able to breathe on his own, but his neurological state was best described "as a state of unresponsive wakefulness."

"He has spontaneous eye opening and blinking. However, he shows no signs of understanding language, responding to verbal commands or awareness of his surroundings," neurologist Daniel Kanter said.

The medical team said Warmbier's severe brain injury was most likely - given his young age - to have been caused by cardiopulmonary arrest cutting the blood supply to the brain.

But they could not definitively say what could have caused such an event, saying they had found no signs of a botulism infection - the explanation given by the North Korean regime for how the young man fell into a coma.

In a one-line statement earlier on Thursday on the state-run Korean Central News Agency, North Korea said it had released Warmbier "on humanitarian grounds."

The university student had been on a tourist trip when he was arrested and sentenced to 15 years hard labour, a punishment the US decried as far out of proportion to his alleged crime, accusing the North of using him as a political pawn.

His release came amid tensions with Washington following a series of missile tests by Pyongyang, focusing attention on an arms buildup that Pentagon chief Jim Mattis this week dubbed "a clear and present danger to all."

In May, State Department special envoy Joe Yun met with high-level representatives from the North Korean foreign ministry on the margins of separate discussions in Norway to talk about detained American citizens.

And at a further meeting in New York on June 6, Yun learned of Warmbier's medical condition for the first time, said spokeswoman Heather Nauert, outlining the release effort. 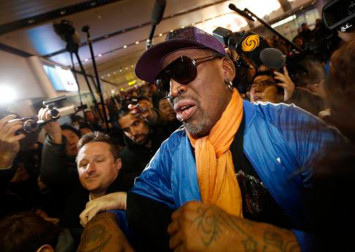 Over the next five days, and after consulting Trump, Secretary of State Rex Tillerson instructed Yun to travel to North Korea to negotiate Warmbier's release.

While there, Yun met with the three other Americans being held, who include two men who taught at a Pyongyang university funded by overseas Christian groups, and a Korean-American pastor accused of espionage for the South.

"There are three other Americans currently being held in North Korea. We hope that they will soon be able to return home," Nauert added.

Washington has stepped up pressure on China and other foreign powers to enforce existing UN sanctions on North Korea, and has deployed increased military assets of its own in the region.

Fred Warmbier expressed gratitude for the US administration's efforts in his son's favour, and said he spoke personally with Trump late Wednesday.

"He was very candid and it was a nice conversation," he said, adding that Trump expressed concern for the family's wellbeing.

Fred Warmbier echoed the message of US officials, who have said Rodman played no role in the release.

"Dennis Rodman had nothing to do with Otto," he said. "It's a diversion, I'm sure." The student's father also criticised the previous administration of Barack Obama for not having done more for their son.

He said officials had counseled the family to not speak out about Otto's detention, to avoid antagonizing the North Korean regime.

"We relied on this false premise that they would treat Otto fairly and let him go," Warmbier said. "The results speak for themselves."