US, UN lead condemnation of 'deplorable' attack in Tunisia 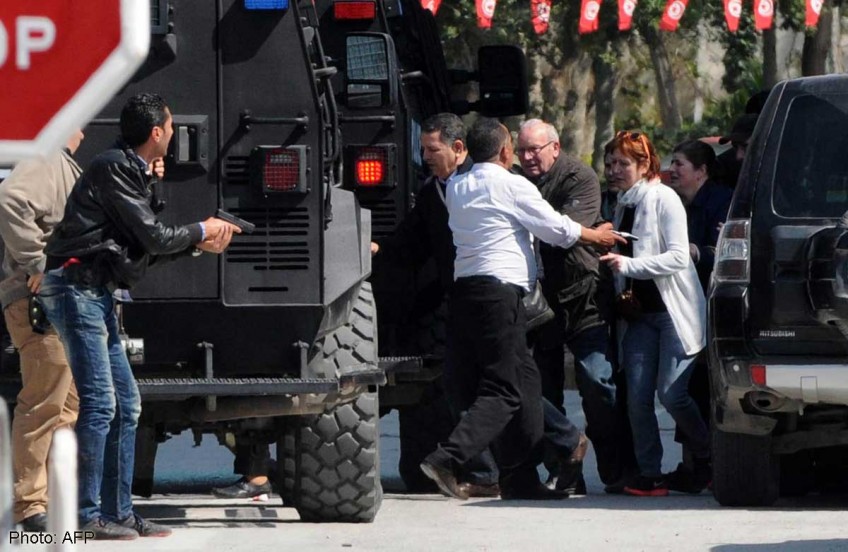 TUNIS - The United States and United Nations led a chorus of international outrage at Wednesday's attack on a Tunis museum which left 19 people dead, most of them foreign tourists.

Kalashnikov-wielding gunmen killed 17 tourists along with a policeman and a Tunisian citizen before themselves being killed in a police assault, Prime Minister Habib Essid said.

US Secretary of State John Kerry in a statement echoed Ban's condemnation and offered his condolences to the victims' families.

He also commended the "Tunisian authorities' rapid response to today's wanton violence and their efforts to resolve the hostage situation and restore calm."

Washington "stands with the Tunisian people at this difficult time and continues to support the Tunisian government's efforts to advance a secure, prosperous, and democratic Tunisia." Kerry stressed.

Kerry often refers to the Tunisian fruit seller whose self-immolation in 2011 set off a series of uprisings and sparked the Arab Spring revolution.

The top US diplomat made a brief, unannounced trip to Tunisia Tuesday to back the transition to democracy in the North African country in February 2014.

Polish, Italian, Spanish and Colombian tourists were said to be among the victims of the attack in broad daylight at the National Bardo Museum in Tunis.

Italian Prime Minister Matteo Renzi denounced the attack on "a symbolic place, a museum, a place of culture in a moderate Islamic country," noting that the killings also took place near the country's parliament building.

"When someone seeks to attack the democratic institution, the culture, the moderation which characterises the Tunisian government, in a way it's an attack on all of use," he said.

More than 40 people were wounded in the attack, including tourists from France, who make up a sizeable proportion of the annual visitors.

In a brief call with his Tunisian counterpart Beji Caid Essebsi, Hollande expressed "the solidarity of France with... the Tunisian people in this very grave moment," a source close to Hollande's office said.

French Prime Minister Manuel Valls said the attack "illustrates the threat that we are all confronted with in Europe, in the Mediterranean, around the world. France, Tunisia and Europe will act together to fight terrorism."

The EU's foreign policy chief Federica Mogherini said the attack "reinforces our determination to cooperation more closely with our partners to tackle the terrorist threat."

She promised EU support for Tunisia in reforming its security sector and in making "the democratic transition and economic reforms which will benefit Tunisians."

NATO chief Jens Stoltenberg for his part said the Alliance "will continue to work with Tunisia and with our Mediterranean dialogue partners in the fight against terrorism."

Morocco was also among the first countries to condemn the attack. Its foreign ministry reiterated the country's solidarity with its fellow north African nation and "support for our Tunisian sister in its efforts to preserve security and stability and eradicate extremism and terrorism."