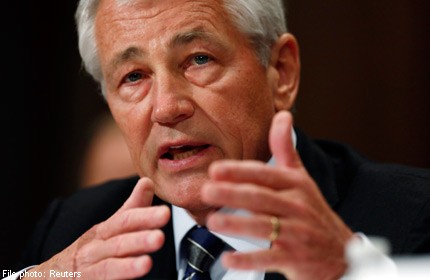 ABOARD A US MILITARY AIRCRAFT, United States - The Pentagon is moving forces into place in case President Barack Obama opts for military action against Syria, US Defence Secretary Chuck Hagel suggested Friday.

Amid calls for military intervention after the Syrian regime carried out an alleged chemical weapons attack this week, US commanders have prepared a range of "options" for Obama if he chooses to launch an attack on the Damascus regime, Hagel told reporters aboard his plane en route to Malaysia.

But he declined to provide any details on the positioning of US troops and assets amid escalation in the Syrian civil war.

"The Defence Department has a responsibility to provide the president with options for all contingencies," Hagel said.

He spoke as a defence official said the US Navy will expand its presence in the Mediterranean with a fourth warship armed with cruise missiles.

The US Sixth Fleet, with responsibility in the Mediterranean, has decided to keep the USS Mahan in the region instead of letting it return to its home port in Norfolk, Virginia.

Three other destroyers are currently deployed in the region - the USS Gravely, USS Barry and USS Ramage. All four warships are equipped with several dozen Tomahawk cruise missiles.

The reinforcement allows the Pentagon to act more rapidly if Obama orders a military strike.

The Pentagon chief and other defence officials made clear no decision had been taken on whether to employ military force against President Bashar al-Assad's regime.

US newspapers have suggested disagreements within the administration over the risks of another American military intervention in the Middle East.

Hagel, who visited US Marines in Hawaii on Thursday before setting off on a week-long tour of Southeast Asia, said he expected American intelligence agencies to "swiftly" assess whether the Syrian government indeed used chemical weapons.

He said the US government would work closely with its allies.

"The international community should and will act in concert on these kinds of issues," Hagel said.