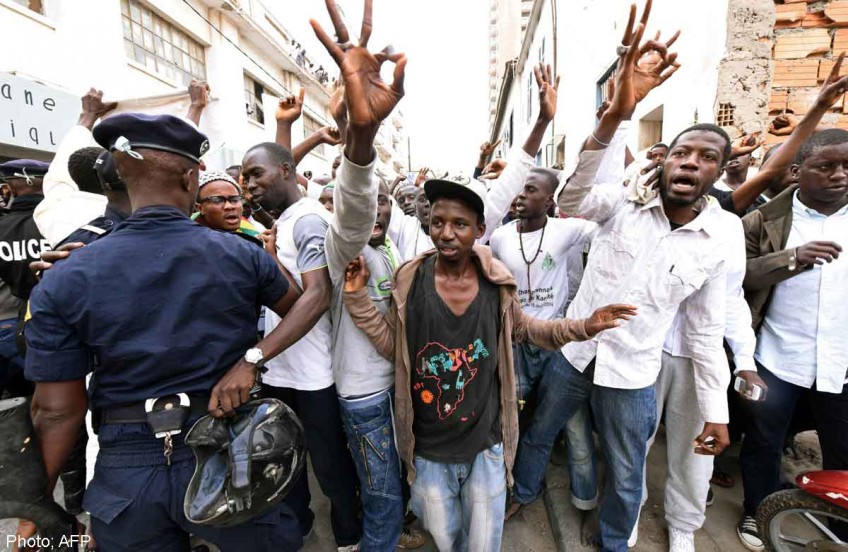 Policemen (L) hold back protesters during a demonstration outside the French embassy in Dakar, against a new cartoon of the Prophet Mohammed published by French magazine Charlie Hebdo.

Washington stressed the "universal" right of the press to freely publish any kind of information, including caricatures, after at least three people were injured when protesters clashed with police outside the French consulate in Karachi, Pakistan.

Among them was an AFP photographer, who was shot in the back.

In Niger's second city, Zinder, protesters smashed the entrance door to the French cultural centre and set fire to its cafeteria, library and offices, while three churches were also torched.

"We certainly urge all to refrain from violence, exercise restraint and respect the rule of law," said Jeffrey Rathke, a State Department spokesman.

"No act of legitimate journalism, however offensive some might find it, justifies an act of violence. That's I think an important starting point."

The latest issue of Charlie Hebdo features a cartoon of Mohammed on its cover holding a "Je Suis Charlie" (I am Charlie) sign under the headline "All is forgiven."

It was the first edition since Cherif and Said Kouachi gunned down 12 people in an attack on the magazine's Paris offices on January 7 over such cartoons.

The image has angered many Muslims as depictions of Mohammed are widely considered forbidden in Islam.

Freedom of expression is enshrined in the US Constitution, but religious satire is seen as taboo.

"And while we may not always agree with any particular judgment or every item of content, the right to publish that information is one that is fundamental and that we see as universal." Washington has not always leaned on the side of Charlie Hebdo's provocative cartoons.

In 2012, the United States criticised a French court decision allowing the satirical magazine to publish controversial cartoons, concerned that they would inflame tensions in Muslim countries.