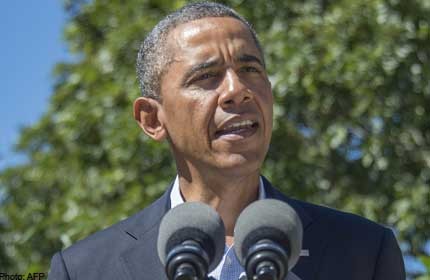 US President Barack Obama makes a statement on Egypt August 15, 2013, in Chilmark, Massachusetts.

UNITED STATES - "Walk Like an Egyptian" - the title of the 1986 hit by the Bangles - was inspired by a scene in ancient Egyptian reliefs that songwriter Liam Sternberg had seen.

It showed people walking awkwardly to keep their balance. The music video that accompanied the single showed celebrities such as Princess Diana and Libyan dictator Muammar Gaddafi dancing in the postures depicted in the reliefs.

In a way, that's the kind of diplomatic posture President Barack Obama and his administration have been maintaining during the recent political crisis in Egypt.

In fact, since the start of the anti-government demonstrations in Tahrir Square in Cairo two years ago, ushering in the so-called Arab Spring, US policy towards Egypt could be compared to a series of odd movements in response to the fast-moving developments there.

Indeed, when it comes to US policy towards Egypt, Mr Obama, "the Fred Astaire of politics - graceful and elegant", as columnist George Will once described him, seems to have two left feet, and certainly no rhythm. He has been moving awkwardly from side to side and looking left and right in response to unfolding events.

Unlike Fred Astaire, who had Ginger Rogers as his dancing partner, President Obama has been forced to take to the dance floor with the likes of Hosni Mubarak, Muhammad Mursi and now Abdel Fattah el-Sisi. And even the most talented choreographer could not turn these painful encounters into a series of eye-catching dance steps.

So it's not surprising that President Obama and his Egypt policy have been criticised by every side, by members of every US foreign policy wing - liberal internationalists and Republican neoconservatives, left-wing idealists and right-wing non-interventionists - as well as by Middle Eastern governments like Israel and Saudi Arabia.

From the differing perspectives, President Obama should have been more forceful in distancing himself from the dictator Mubarak and in allying himself with the 2011 Tahrir Square demonstrators; or he shouldn't have abandoned long-time US friend Mubarak and shouldn't have welcomed the electoral victory of the Muslim Brotherhood.

Mr Obama has also been blasted by both the leaders of the Muslim Brotherhood (who suspect Washington was the driving force behind the military coup that forced them out of power) and by Egypt's army and its allies among the secular liberals (who have alleged the US conspired to help the Muslim Brotherhood).

In a bizarre twist, some of them echo the allegation of American Tea Partiers and suggest Mr Obama is actually a, well, Muslim. But much of this criticism assumes the Obama administration - or, for that matter, any US administration in the last five years - would have been in a position to affect political developments in Egypt in any dramatic way.

In reality, as opposed to the wishful thinking and fantasies of foreign policy pundits, the military and diplomatic setbacks that America has suffered in Iraq and Afghanistan, and in the entire Greater Middle East in between, coupled with the 2008 financial meltdown and the ensuing Great Recession, have made it difficult for Washington to utilise what remained of its leverage in the Middle East to set the course of the Arab Spring.

President Obama had little choice but to embrace the changes taking place in Egypt. He certainly wasn't in a position to instruct the military to suppress the 2011 protests and keep Mubarak in power or to veto its 2013 coup and prevent the ouster of Mursi.

And the Americans had no business playing favourites with either the Muslim Brotherhood or its liberal camp opponents.

After all, it wasn't long ago that the critics of the current US policy towards the military operated under the assumption that liberal and secular Egyptians, and members of the Christian minority, were staunch opponents of the military.

So now that these same Egyptians (by definition more Westernised than Mursi's supporters) are backing the military, should Washington distance itself from them and help the Muslim Brotherhood regain power in the name of democracy and human rights?

That would be a wrong step for Washington to take. But it doesn't mean the Americans should not reassess their relationship with Cairo and the level of military and economic aid it gives. That reassessment should be made by considering US strategic interests in Egypt and the Middle East and not on the basis on a vague commitment to democratic principles.

Washington has neither the power nor moral authority to dictate to the Egyptians its preferred political model. It will have no choice but to continue walking like an Egyptian, doing all those awkward diplomatic movements.