The waste-collecting cyclists who caught the UN's eye 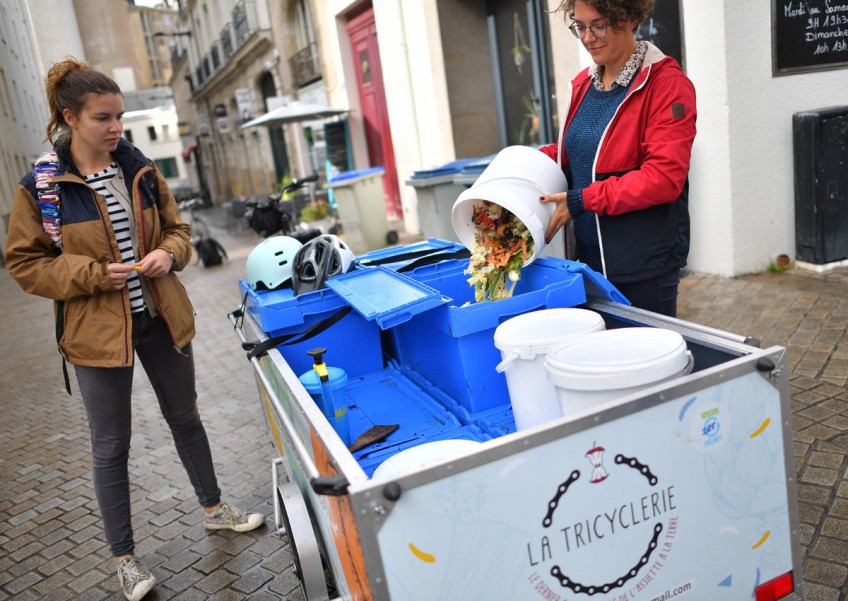 Nantes, France - Putting an end to the unnecessary burning of biodegradable waste, one restaurant at a time, has become the forceful mission of a team of French cyclists.

Their creative initiative, which relies largely on volunteers, has even impressed the United Nations.

La Tricyclerie, a neat play on the French words for sorting out rubbish, recycling and biking, turns vegetable, coffee, and other organic waste into compost.

CoordinatorValentine Vilboux, 29, travels on her electric bicycle to restaurants in the western city of Nantes, collecting peelings otherwise destined for the bin.

"It's simple; we take everything, even the eggshells and citrus fruits. Everything apart from bread, meat and fish," she says.

"It's a lot! It proves the food is fresh and homemade," she says, of one cafe after weighing out 20 kilos (44 pounds) of vegetable peelings.

Launched at the end of 2015 with just eight restaurants on board, the anti-waste tour has grown to include 23 restaurants and nine businesses, catching the attention of the United Nations.

"It's very rewarding, even if you don't feel like you've invented something incredible," said Vilboux.

While paper and glass recycling is becoming automatic to many, biodegradable waste generally ends up in landfill or incinerators in France.

This "black gold" could serve as fertiliser for farmers once it's been composted, and currently represents a third of French household rubbish.

Salad bar manager Colette Marghieri wanted to join the scheme, even though there is no legal obligation to separate biodegradable rubbish.

"At the start, I had some doubts about the sorting but it's easy and it doesn't disrupt the service at all," she said.

Fellow restaurant manager Guenole Clequin said: "It's simple and very effective. We can see how much used to be thrown away." La Tricyclerie, which has two paid staff and about 10 volunteer collectors on bikes, receives a financial contribution of 40 euros per month and an annual membership fee of 50 euros from each business.

"A real community with the restaurants has built up around the reduction of rubbish and the creation of compost - we are real environmental actors," said one of the volunteers, Pierre Briand, stirring smoking compost.

Cyclists call at each restaurant twice a week to pick up the waste.

The compost is redistributed free of charge to community gardens or to students of the Nantes horticultural school.

La Tricyclerie, which collects around 1.5 tonnes of waste a month, has set itself an objective of reducing the volume of restaurant food waste in the city by 40 per cent.

And the impact could spread out of town.

The initiative has already been contacted by interested individuals in the southern French city of Perpignan, the Belgian capital Brussels, and the Indian Ocean island of La Reunion.

"It's a little drop, but the potential is enormous," Vilboux said confidently.