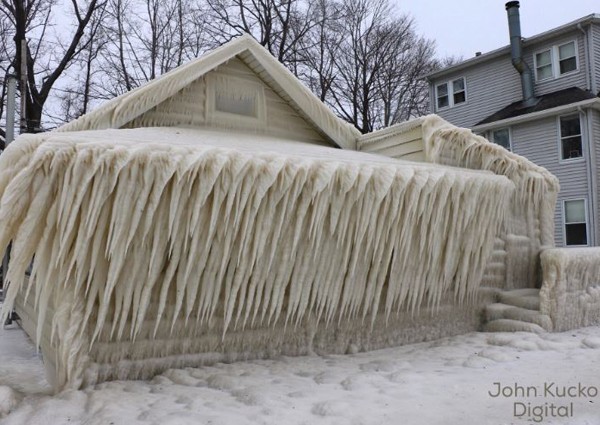 While a good chunk of the Northeast is prepping for a storm, some New York residents are dealing with another winter nuisance: ice.

A home situated directly on Lake Ontario in Webster, New York, has turned into an almost literal ice house after strong winds coupled with low temperatures over the course of multiple days encased the home with a thick blanket of ice.

Photographer John Kucko brought the ice house to the internet's attention when he first posted some photos to his Facebook page and Twitter. When people tried to say they were altered, he took some videos to prove them wrong.

Some believed the photos were faked because the neighbouring homes did not have the problem, Kucko claims that because the other homes have retaining walls, the ice doesn't build up nearly as much.

In one clip, Kucko claims that the ice may be up to six inches thick on the side if the home that faces the lake.

According to a neighbour, the home has been "going through this for years," so this is probably not the first time the home looked like a house out of Disney's Frozen.

We reached out to Kucko for additional information and comments.