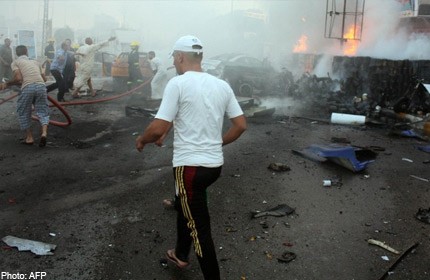 BAGHDAD: A wave of bombings killed 65 people in Baghdad province on Saturday night, officials said, as Iraq struggles to contain its worst violence since 2008, in which over 520 have died this month.

Twelve car bombs and a roadside bomb hit the city of Baghdad, while another bomb exploded in Madain to the south of the capital, a police colonel and a medical official said.

The bombs struck as Baghdad residents turned out to shop and relax in cafes after iftar, the meal that breaks the daily fast during the Muslim holy month of Ramadan.

In the deadliest incidents, two car bombs killed 12 people in the Karrada, while two car bombs and a roadside bomb hit Zafraniyah, both areas in central Baghdad.

A roadside bomb against a patrol killed a policeman and wounded another in the city of Mosul, while a car bomb southeast of the city killed a woman and wounded 22 people, including seven police, and a bomb to its west wounded three people.

Saturday was the deadliest day of violence in Iraq since June 10, when attacks killed 78 people.

The Saturday bombings came a day after a suicide bomber killed 20 people inside a crowded Sunni mosque north of the capital.

Militants have attacked both Sunni and Shiite mosques in recent months, raising fears of a return to all-out sectarian conflict that killed tens of thousands of people in past years.

More than 2,700 people have been killed in Iraq since the beginning of 2013, according to AFP figures based on security and medical sources.

Most senior officials and religious leaders remain silent on the unrest.

In May, Prime Minister Nuri al-Maliki ordered a shakeup of senior security officers, but the move has failed to curb the unrest.

Iraq has faced years of attacks by militants, but analysts say widespread discontent among members of its Sunni minority, which the government has failed to address, has fuelled this year's surge in unrest.

Iraqi Sunnis accuse the Shiite-led government of marginalising and targeting their community, including via unwarranted arrests and terrorism charges.

Protests broke out in Sunni-majority areas at the end of 2012 and are still ongoing.

On April 23, security forces moved against protesters near the town of Hawijah in the north, sparking clashes that killed 53 people and sending tensions soaring.

More than 450 people have been killed each month from April to the present.

In addition to security, the government in Baghdad is also failing when it comes to other basic functions.

Iraqis are faced with severely lacking basic services, including electricity and clean water, and corruption is widespread.

And political squabbling has paralysed the government, which has passed almost no major legislation in years.