'We have shot down a plane': Pro-Russia rebels in leaked audio 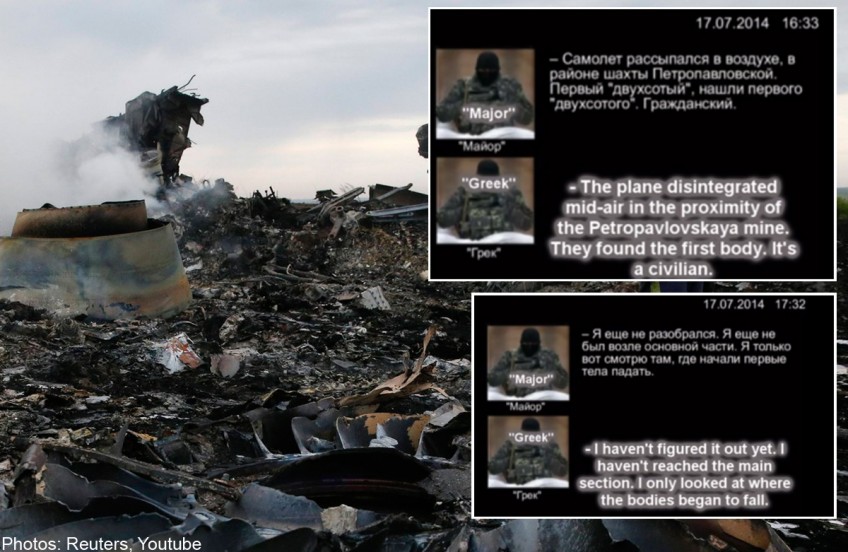 HRABOVE Ukraine - The United States believes a surface-to-air missile brought down a Malaysian airliner that crashed in eastern Ukraine on Thursday, killing all 298 people on board, an incident that sharply raises the stakes in a conflict between Kiev and pro-Moscow rebels.

One US official said Washington strongly suspected the missile that downed the Malaysia Airlines Boeing 777 on a flight from Amsterdam to Kuala Lumpur was fired by Ukrainian separatists backed by Moscow.

There is no evidence Ukrainian government forces fired a missile, said the official, speaking on condition of anonymity. A second US official said the origin of the missile was unclear. US Vice President Joe Biden, speaking in Detroit, said the passenger jet apparently was "blown out of the sky".

Russian President Vladimir Putin - at loggerheads with the West over his policies toward Ukraine - pinned the blame on Kiev for renewing its offensive against rebels two weeks ago after a ceasefire failed to hold. The Kremlin leader called it a "tragedy" but did not say who brought the Boeing down.

The loss of MH-17 is the second disaster for Malaysia Airlines this year, following the mysterious loss of flight MH-370 in March, which disappeared with 239 passengers and crew on board on its way from Kuala Lumpur to Beijing.

"If it transpires that the plane was indeed shot down, we insist that the perpetrators must swiftly be brought to justice," Malaysian Prime Minister Najib Razak told a pre-dawn news conference in Kuala Lumpur.

"This is a tragic day, in what has already been a tragic year, for Malaysia."

Ukrainian President Petro Poroshenko, who had stepped up an offensive in the east, spoke to US President Barack Obama and sought to rally world opinion behind his cause. "The external aggression against Ukraine is not just our problem but a threat to European and global security," he said in a statement.

Financial markets were hit by worries of new geopolitical tensions, as Israel invaded the Gaza Strip on the same day.

Smouldering wreckage of the Boeing 777 lay strewn in fields near the Russian border, along with the bodies of passengers, more than half of them Dutch. With the area held by rebel forces, an international row was brewing over access to the site after separatists said they had taken a black box flight recorder.

UN Secretary-General Ban Ki-moon called for a transparent international investigation of the incident. The UN Security Council will discuss the issue on Friday.

The scale of the disaster, which left scores of unsuspecting foreigners, including many children, scattered lifeless across the muddy Ukrainian steppe, could prove a turning point for international pressure to resolve the crisis. It has killed hundreds since protests toppled the Moscow-backed president in Kiev in February and Russia annexed the Crimea a month later.

As word came in of what might be the worst ever attack on a civilian airliner, Obama was on the phone with Putin, discussing a new round of economic sanctions that Washington and its allies have imposed to try to force Putin to do more to curb the revolt against the new government in Kiev.

Obama warned of further sanctions if Moscow did not change course in Ukraine, the White House said.

Reuters journalists saw burning and charred wreckage bearing the red and blue Malaysia Airlines insignia and dozens of bodies in fields near the village of Hrabove, 40 km (25 miles) from the Russian border near the rebel-held regional capital of Donetsk.

The airline said it was carrying 283 passengers and 15 crew.

The Netherlands declared a day of national mourning for its 154 dead. Twenty-eight passengers were Malaysian, 27 Australian, 11 Indonesian, six British, four German, four Belgian, three Filipino and one Canadian. All 15 crew were Malaysian. Nationalities of the others aboard were unclear.

Poroshenko called the incident a "terrorist" act and Ukrainian officials accused rebels of using a Soviet-era SA-11 missile system acquired from Russia - offering evidence that they may have believed they were firing on a Ukrainian military aircraft.

The Ukrainian government released recordings it said were of Russian intelligence officers discussing the shooting down of an aircraft by rebels they were supporting. Supposedly timed within minutes of the last radar contact with MH-17 around 4:20 p.m. (1320 GMT), they suggested militants thought they had hit a Ukrainian military plane before finding the airliner remains.

"Hell," says one of those being recorded. "It's almost 100 per cent certain that it's a civilian plane. Bits were falling in the streets ... Bits of seat, bodies."

After the downing of several Ukrainian military aircraft in the area in recent months, including two this week, Kiev had accused Russian forces of playing a direct role.

International air lanes had been open in the area, although only above 32,000 ft (9,750 metres). The Malaysia plane was flying 1,000 ft higher, officials said. The area was closed to flights afterwards.

Ukrainian Interior Ministry official Anton Gerashchenko said on Facebook: "Just now, over Torez, terrorists using a Buk anti-aircraft system kindly given to them by Putin have shot down a civilian airliner flying from Amsterdam to Kuala Lumpur."

He also published a photograph he said showed a Buk launcher in the centre of the town of Torez, near Hrabove, on Thursday. It was not possible to verify the image.

One group was quoted as saying that it used such a weapon on Monday to bring down an Antonov An-26 turboprop plane - a loss that the Ukrainian forces had confirmed this week along with the downing of a Sukhoi Su-25 fighter on Wednesday.

"I was working in the field on my tractor when I heard the sound of a plane and then a bang," one local man told Reuters at Hrabove, known in Russian as Grabovo. "Then I saw the plane hit the ground and break in two. There was thick black smoke."

An emergency worker said at least 100 bodies had been found so far and that debris was spread over 15 km (9 miles). People were scouring the area for the black box flight recorders and separatists were later quoted as saying they had found one.

Kiev complained that separatists who are the main force in the area prevented Ukrainian officials from reaching the site.

After Obama and Poroshenko spoke, the White House said: "The presidents emphasised that all evidence from the crash site must remain in place on the territory of Ukraine until international investigators are able to examine all aspects of the tragedy."

At the airport in Kuala Lumpur, relatives of those aboard gathered, hoping for word. Akma Mohammad Noor said her sister, Rahimah, was on the flight, coming home for the first time in years to mark the Muslim festival of the end of Ramadan.

"We were supposed to celebrate," Noor said, weeping.

Russia, which Western powers accuse of trying to destabilise Ukraine to maintain influence over its old Soviet empire, has accused Kiev's leaders of mounting a fascist coup. It says it is holding troops in readiness to protect Russian-speakers in the east - the same rationale it used for taking over Crimea.

The following is the transcript allegedly of an intercepted conversation between pro-Russia rebels and Russian military intelligence officers suggesting that the rebels are responsible for shooting down MH17 that killed all 298 passengers on board:

Igor Bezler: We have just shot down a plane. Group Minera. It fell down beyond Yenakievo (Donetsk Oblast).

Vasili Geranin: Pilots. Where are the pilots?

IB: Gone to search for and photograph the plane. It's smoking.

VG: How many minutes ago?

SBU comments in the video: After examining the site of the plane the terrorists come to the conclusion that they have shot down a civilian plane. The next part of the conversation took place about 40 minutes later.

The next call is made by two unidentified men nicknamed Major and Greek.

"Major": These are Chernukhin folks who shot down the plane. From the Chernukhin check point. Those cossacks who are based in Chernukhino.

"Major": The plane fell apart in the air. In the area of Petropavlovskaya mine. The first "200" (code word for dead person). We have found the first "200". A Civilian.

"Greek": Well, what do you have there?

"Major": In short, it was 100 per cent a passenger (civilian) aircraft.

"Greek": Are many people there?

"Major": The debris fell right into the yards (of homes).

"Greek": What kind of aircraft?

"Major": I haven't ascertained this. I haven't been to the main sight. I am only surveying the scene where the first bodies fell. There are the remains of internal brackets, seats and bodies.

"Greek": Is there anything left of the weapon?

"Greek": Are there documents?

"Major": Yes, of one Indonesian student. From a university in Thompson.

In the final phone call, a rebel checks in with his commander:

Militant: Regarding the plane shot down in the area of Snizhne-Torez. It's a civilian one. Fell down near Grabove. There are lots of corpses of women and children. The Cossacks are out there looking at all this.

They say on TV it's AN-26 transport plane, but they say it's written Malaysia Airlines on the plane. What was it doing on Ukraine's territory?

Nikolay Kozitsin: That means they were carrying spies. They shouldn't be f***ing flying. There is a war going on.

Note that the video has not been verified.