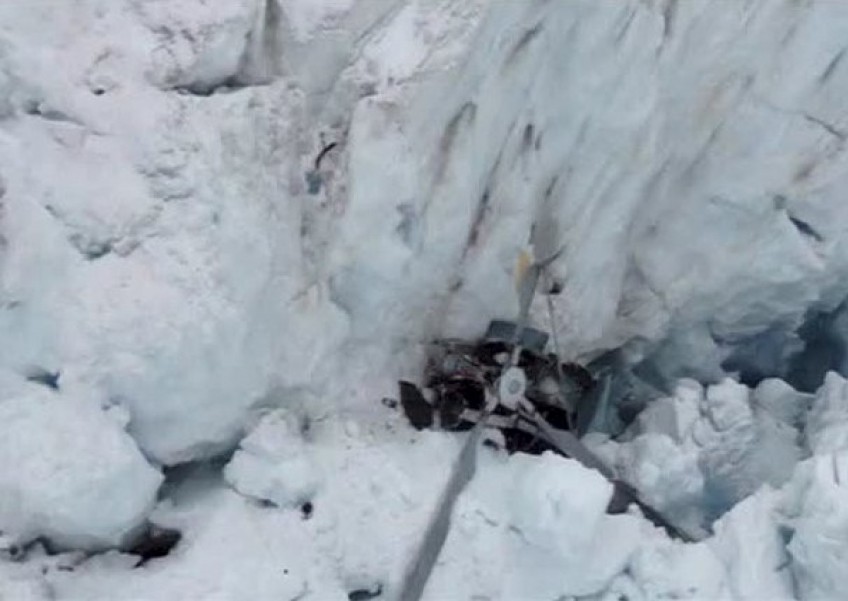 A photograph released by New Zealand police shows the remains of the helicopter embedded in the crevasse at Fox Glacier, South Island
Reuters

Police described conditions on the Fox Glacier, a popular tourist site on the west coast of the South Island, as "dangerous" and said it could take two or three days to retrieve all of the victims.

Four English and two Australian tourists as well as their New Zealand pilot died when the helicopter plunged into the heavily crevassed glacier during bad weather on Saturday.

The dead were identified as Britons Andrew Virco, 50, and Katharine Walker, 51, of Cambridge, Nigel Edwin Charlton, 66, and Cynthia Charlton of Hampshire along with Australians Sovannmony Leang, 27 and Josephine Gibson, 29 from New South Wales state.

Police had initially said Leang and Gibson were from South Australia.

The pilot, Mitch Gameren, 28, had only recently returned to New Zealand after flying medevac missions in Malaysia.

Continuing rain and low cloud hindered recovery efforts until a break in the weather late Sunday morning allowed helicopters to take the specialist recovery team to the site of the disaster near the top of the glacier.

Three bodies were recovered before the weather closed in again and the operation was halted for the day.

Police inspector John Canning said the recovery operation would resume when conditions improved, but the immediate forecast was not good.

"The weather has turned bad at the top of the glacier," he said.

"The conditions up there are dangerous, so we've got to take our time and ensure the safety of our staff is paramount.

"Our plan is to go forward and recover the remaining bodies up there in the next day or so. It could take two or three days." Mike Nolan, a spokesman for Alpine Adventures, which operated the Squirrel helicopter, said the ongoing dismal weather meant it would take time to complete the recovery operation.

"The weather is certainly hampering efforts. It looks like inclement weather for a further two or three days unfortunately," he told the New Zealand Herald.

"Hopefully there are some breaks in between where they can make progress - but at this stage it's really slow." The cause of the crash was not immediately known and aviation authorities were investigating.

Police were only alerted to the accident when the helicopter's emergency locator beacon was activated late Saturday morning.

Debris was later found spread over several hundred metres with the main part of the aircraft wedged between house-sized blocks of ice.

All sightseeing tours over the glacier were grounded on Sunday to give airspace priority to the recovery operation.

The 13-kilometre (eight-mile) long Fox Glacier is listed as one of the most accessible glaciers in the world, attracting thousands of tourists each year.