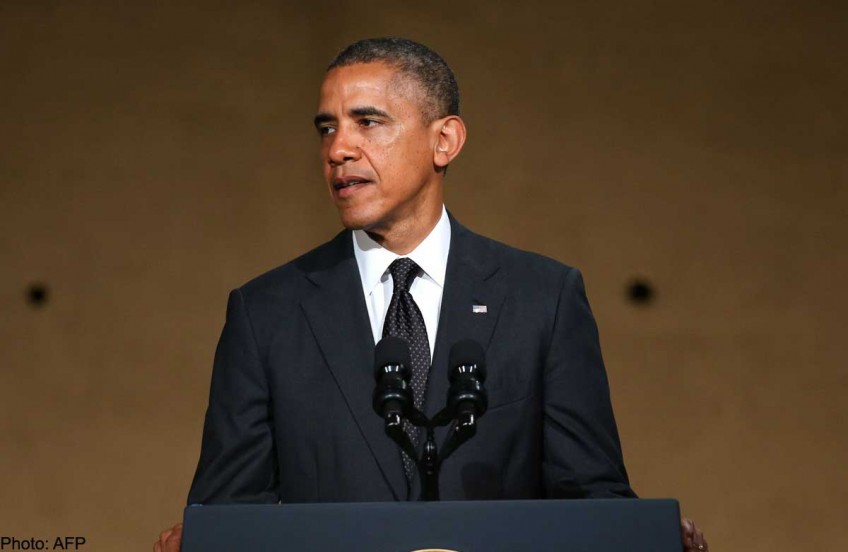 WASHINGTON - The United States called for an unimpeded and prompt probe into the apparent shooting down of a Malaysian airliner over rebel-held eastern Ukraine, and said evidence from the crash site must not be moved.

In calls with pro-Western Ukrainian President Petro Poroshenko and Dutch Prime Minister Mark Rutte, US President Barack Obama put down an early marker on the necessary conditions for an air accident investigation that will have to take place in the middle of an escalating civil war.

More than 150 Dutch citizens are believed to be among the dead when the Malaysian Airlines jet crashed. US officials said the jet was hit by a surface-to-air missile but could not say who launched the attack and from where.

The White House said that Obama told Rutte the United States was prepared to contribute "immediate assistance" for "a prompt, full, credible and unimpeded international investigation." Obama and Rutte also agreed on the need for "immediate access" to the site of the crash in territory held by pro-Russia separatists, a White House statement said.

Secretary of State John Kerry said his staff was trying to determine whether there were any Americans aboard the flight as he backed calls for a "credible" probe.

"Horrified" by the crash, Kerry said Washington was "prepared to assist with a credible, international investigation any way we can."

The airliner went down a day after Washington toughened sanctions on Moscow, saying it had not done enough to convince Ukrainian separatists to lay down their arms or to stop the flow of weapons and material across the border to rebels fighting the government in Kiev.

Ironically, initial reports that the plane had gone down over the war zone came when Obama was on the phone to Russian President Vladimir Putin explaining why Washington was taking new swipes at the defence, finance and energy sectors of the Russian economy.

Earlier, the White House warned in an account of a call between Obama and Poroshenko that evidence from the plane, which was carrying 298 people, must not be taken out of the country until a "thorough and transparent" investigation had taken place.

Obama assured Poroshenko that US experts will "offer all possible assistance immediately" to investigate what caused the plane to plunge from the sky.

"The presidents emphasised that all evidence from the crash site must remain in place on the territory of Ukraine until international investigators are able to examine all aspects of the tragedy," the White House said.

The two White House statements raised the possibility that US officials are concerned pro-Russian forces could try to tamper with the evidence of the wrecked aircraft to cover up who is to blame.

Obama also spoke by telephone to Malaysian Prime Minister Najib Razak, as his country reeled from the second disaster to strike the national airline within four months.

Malaysia Airlines flight MH370 disappeared on March 8, and is believed to have crashed into a remote part of the Indian Ocean, though no trace of the plane has yet been found.

Obama was on the road in Delaware and New York for political events, but addressed the shooting down of the aircraft briefly, as details were still emerging.

"And as a country, our thoughts and prayers are with all the families of the passengers, wherever they call home," Obama said in Wilmington, Delaware.

After arriving in New York, Obama spoke by phone with Secretary of State John Kerry about the aftermath of the disaster.

He then convened a secure call with members of his national security team, including White House Chief of Staff Denis McDonough, CIA Director John Brennan and other key intelligence and foreign policy aides.