Who were the Nice attack victims? 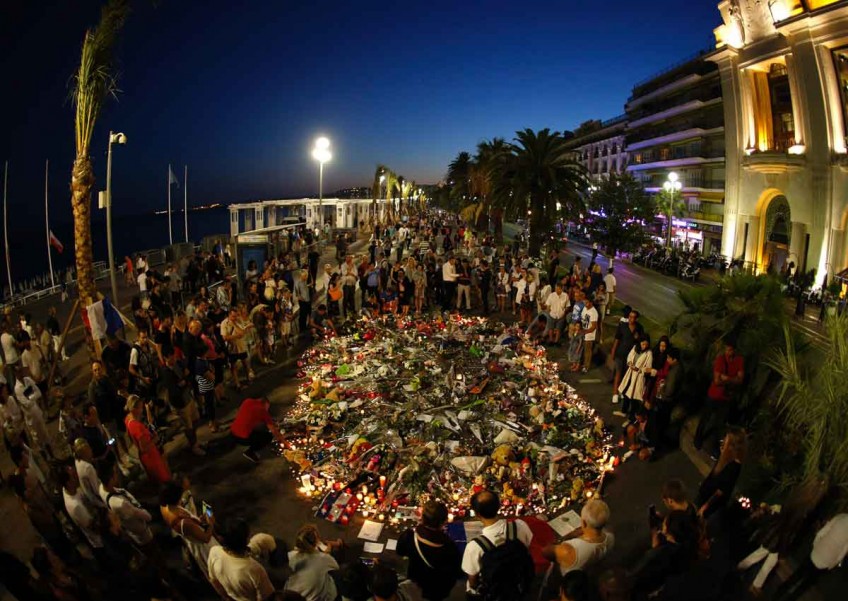 Members of the public gather at a makeshift memorial on the Promenade des Anglais in Nice on July 17, 2016, in tribute to the victims of the Bastille Day attack that left 84 dead.
AFP

PARIS - Victims of the Nice truck attack included three generations of a family out for a stroll, a Frenchman protecting his pregnant wife and a former Soviet soldier.

The Bastille Day assault killed 84 people of all ages - including 10 children - who had been out enjoying a fireworks display on a warm summer evening. The dead came from at least 12 countries.

More than 300 people were also injured when the Tunisian driver slammed his truck into the crowd on the seaside promenade on Thursday.

Here are some of the victims' stories.

Four-year-old Yanis C, described by his father Michael in local media as "a rascal, a scallywag, always smiling", was playing with other children a few feet from his parents when he was hit.

Mehdi H was the 12-year-old son of a Nice football referee who also lost his sister-in-law in the attack. His twin sister is in a coma.

Another 12-year-old, Amie V, was the daughter of a magazine journalist based in Nice.

One 14-year-old boy who is in a critical condition will wake up to the death of his mother, Christine Fabry, 67, and her partner Hugues Mismarck. His sister is injured and 17-year-old brother is missing.

Christophe Lyon, the former head of a rugby club, lost his wife, parents, parents-in-law and his wife's son in the attack.

They were grandparents Francois, 82, and Christiane Locatelli, 78, their daughter Veronique Lyon, 55, and grandson Michael Pellegrini, 28. His parents were Gisele and Germain Lyon.

Laurence Tavet, 49, who was married to an Algerian, was killed with two of her grandchildren. One of them, seven-year-old Yanis, had come to visit her on his holidays, the Algerian foreign ministry said.

Tunisian national Olfa Bent Souayah Khalfallah, 31, was with her four-year-old son on a family holiday from their home in Lyon, France.

Her devastated husband searched for their son for more than two days before discovering that the little boy had also been killed.

Timothe Fournier, a 27-year-old Parisian, died after pushing his seven-months-pregnant wife out of the truck's deadly path, his cousin Anais told AFP.

"He was a great guy," she said. "A young dreamer, but someone who was always there for his family." A Texas-based newspaper identified the two Americans killed as baseball coach Sean Copeland, 51, and his 11-year-old son Brodie, who were on a family vacation in Europe.

"They are so loved," the Austin American-Statesman quoted the family as saying in a statement.

Sisters Magdalena, 21, and Marzena Chrzanowska, 20, were on holiday with their two other sisters when they were killed, the priest in their hometown of Krzyszkowice, Poland, told AFP.

Fatima Charrihi, 60, a Nice resident and mother of seven, was among the first to be killed by the driver, her son Hamza told local media.

He described her as "an extraordinary mum" and a devout Muslim who practised "real Islam, not that of the terrorists".

Madagascan mother Mino Razafitrimo, 31, was with her two children aged four and six, who survived. She was a "joyous person very involved with the Malagasy community in Nice", a friend told AFP.

A teacher and two of her students from Berlin's Paula-Fuerst School were killed, the Berlin mayor's office said.

American student Nicolas Leslie was also killed, the University of California, Berkeley said. The 20-year-old had been in the French city as part of Berkeley's study abroad programme.

Men and women of all professions were among the dead.

Former Soviet soldier Igor Sheleshko, 47, was a father-of-four who held both Russian and Belgian nationality.

He had been living in Nice for four months, said Andrey Eliseev, arch-priest of the Saint-Nicolas cathedral who described him as "a pious man".

The priest named another victim as Roman Ekmaliyan, a Georgian businessman of Armenian origin who had lived in Belgium. The 56-year-old was "very intelligent on all topics - interested in history, politics".

Robert Marchand, 60, was an athletics trainer from Marcigny, a small town in central France. He had raised the town's club "to a very high level", mayor Louis Poncet told AFP.

And David Bonnet, a 44-year-old fish farmer, was out with his new partner, who was injured in the attack.