Will Russia 'punish' Singapore, Japan and others with cyberattacks, trade restrictions?

When Singapore joined the West in imposing sanctions on Russia for its invasion of Ukraine earlier this year, its government landed in a list of administrations deemed "unfriendly" by Moscow.

The list - mostly made up of the US and its allies - also included the Asian economies of Japan, South Korea and Taiwan.

Those governments, too, have levelled varying levels of economic sanctions on Russia and appear to have accelerated their support for Ukraine in recent days.

In Taiwan , the self-ruled island viewed by Beijing as a renegade province, Foreign Minister Joseph Wu last week pledged a US$500,000 (S$700,000) donation to rebuild the Ukrainian town of Bucha, where "some of the worst war crimes" were taking place.

Japan just banned Russian gold exports and expanded its sanctions to Russian oligarchs, and Singapore deployed ambulances, mine detectors and fire engines to Ukraine at its request.

While the Kremlin has remained largely silent about Asia 's response to its operations in Ukraine, analysts said the region was not ruling out the possibility of a reprisal.

Such a move could come in the form of trade sanctions or sophisticated cyber attacks that Moscow has been notorious for, the observers suggested.

Russia's envoy to Japan had in February warned Moscow was ready to retaliate against Japan's sweeping sanctions. Among other things, Tokyo banned imports of Russian machinery and vodka and froze assets held by major Russian lenders.

For Singapore, a source familiar with the matter told This Week in Asia in May that there would be "some sort of retaliation" too, if the city state doubled down on sanctions or sent military aid to Ukraine.

At that point, a concrete plan had not been formulated by Russia's trade ministry but there were "some measures at hand" that could be tapped, including limits on oil exports.

"When that happens, it means that Singapore does not value our bilateral relationship," the source, a senior Russian diplomat said, requesting anonymity due to the sensitivity of the issue. "So why should we?"

Chris Miller, assistant professor of international history at Tufts University, suggested that Russia's ties with Japan and South Korea have become increasingly tense since it waged war in Ukraine in late February.

Moscow has since upped military pressure on both countries, including by holding joint exercises with China near Japan.

Miller said, though, that it was unlikely that Russia would take "major steps to punish either country" as it has few good options to do so.

"If the Kremlin were to retaliate ... the economic impact on Singapore would be negligible," saif analyst Ian Storey.

Ian Storey, senior fellow at the ISEAS-Yusof Ishak Institute, said the Kremlin's move to add Singapore to its list of "unfriendly" countries meant Russia may impose certain trade and currency restrictions against the city state.

It may also limit the number of local staff the Singapore embassy in Moscow can hire.

But Storey noted that the economic relationship between Singapore and Russia was relatively small compared to other major powers such as China, Japan and the US.

Russia accounts for less than one per cent of Singapore's total imports, with refined petroleum, crude petroleum and raw nickel as main products. Meanwhile, its trade - primarily energy resources - with Japan stands at 1.8 per cent of its total imports.

"If the Kremlin were to retaliate against the city state by imposing its own sanctions, the economic impact on Singapore would be negligible," he said. "In fact, as Russia exports more to Singapore than it imports, any sanctions would hurt Russia more."

For now, Moscow's isolation from the West - which has prompted a scramble to reconfigure the Russian economy towards Asia - could help constrain harsh retaliatory actions from the Kremlin, said Gavin Wilde, a senior fellow at the Carnegie Endowment for International Peace (CEIP) think tank.

Wilde, who carries out research on information warfare, cautioned that there were other risks that countries could be susceptible to, including Russia-backed cyber attacks.

"Disruptive cyberattacks are an easy and deniable means of coercion or reprisal and President Putin has recently proven all too willing to gamble away Russia's economic interests to make a geopolitical point," he said.

Earlier this week, Russian hacker group Killnet claimed responsibility for cyberattacks on Lithuania's government and private websites, in response to the Baltic country's blocking of goods to Russia's Kaliningrad exclave.

Even if Russia's intelligence and security services had their hands full with the West, pro-Russian proxies and ransomware groups could potentially be mobilised, Wilde said.

In fact, Microsoft has already detected such activity. In a report released last week, it said Russian intelligence agencies had ramped up their network penetration and espionage activities targeting governments outside Ukraine.

While the majority of those countries lay outside the Asia-Pacific region, Japan and Australia were targeted. The aim of the cyber offensive, according to the 29-page report, appears to be focused on obtaining information from "inside the governments that are playing critical roles" in the West's response to the Ukraine war .

Wilde said the report served as a reminder that governments and industries needed to assess their risks, particularly during periods of heightened geopolitical tensions. "Not only from direct targeting, but from the potential second- and third-order effects of disruptive cyber operations elsewhere," he said.

He cited the example of the 2020 cyber attack involving software firm SolarWinds, in which Russian hackers used a piece of compromised software to breach over 200 companies and institutions, including US federal government agencies and the European Parliament.

"In other words, their interdependencies may be as much a risk factor as their immediate stance towards Moscow's war on Ukraine," added Wilde.

If the Kremlin decided to stage a cyber warfare on Asian countries, Wilde said one likely scenario would be a "Russian propaganda blitz" in both traditional and social media spaces.

"Many regional audiences, like Indonesia's for instance, are both saturated by, and sympathetic to, the narratives propagated by Russian outlets and online actors who play on deeper cultural, religious and historic themes that undermine support for US and European policy and distort realities about Russia's war in Ukraine."

In Southeast Asia , this fear of retaliation from Russia - with whom many countries have complex trade and security ties - has often been cited as a reason for their rather muted or cautious approach to the Ukraine war.

Although most countries had, in some form or another, aired concerns, none have gone to the extent of slapping sanctions on Moscow, except for Singapore.

But governments have been facing growing pressure from Western leaders to do more as they seek to expand the coalition against Russia beyond Europe and as the conflict enters its fourth month.

Particularly, Indonesian President Joko Widodo, who chairs the G20 summit this year, has been pushed to exclude Putin from the November meeting.

Widodo has not done so but has instead extended the invitation to Ukraine's Volodymyr Zelenskiy. The Indonesian leader said he would attempt to get Putin to agree to a ceasefire ahead of their Thursday meeting.

Waffaa Kharisma, researcher at the Centre for Strategic and International Studies in Indonesia, argued that Indonesia could do more.

He pointed to how Jakarta had in the past lodged protests, through multilateral forums or backdoor diplomacy, when major powers were deemed to have violated international norms. This included Washington's intervention in Iraq.

"We do have experience in being principled, in calling out atrocities," he said. "Being principled is the least that we can do, even if there is temptation to be pragmatic."

Kharisma also noted that while Indonesia had some trade ties with Russia - from which it imports semi-finished iron, coal briquettes, and potassic fertiliser - the scale of it was not as significant as imagined, which would give Jakarta some room to manoeuvre.

"So the actual relationship is not that significant in the short term," Kharisma said. "Our current government just doesn't want to lose that position as a middle moderating power between conflicting parties."

Still, despite pressures from the West, he said it was "unthinkable" that Indonesia would impose sanctions on Russia, as such a move would be viewed unfavourably domestically and also risk isolating a major power.

Widodo had in April rejected Ukraine's request for military help.

"From past records, we rarely go outside our direct region to do something assertive. If we are to act abroad, it is usually that it crosses Indonesia's direct interests," Kharisma said. 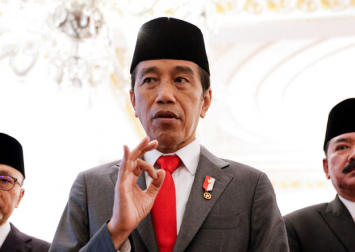 Storey, the senior fellow at ISEAS-Yusof Ishak Institute, agreed that other countries in Southeast Asia would not go out of their way to level sanctions unless mandated by the UN.

Most states in the region would try to maintain a neutral stance, he said, as governments did not see it in their interests to take a harder line against Russia, nor was there pressure from their people to do so.

Kharisma said it was difficult to tell if countries who had shown support for Ukraine and condemned Russia's actions - including Indonesia - would face retaliatory moves from Moscow, though he suggested it would likely depend on the country's ties with Russia and the types of support it was offering.

"I think there should be an area where countries like Indonesia can respond to calls for assistance, which the Russia side cannot legitimately retaliate upon," he said.