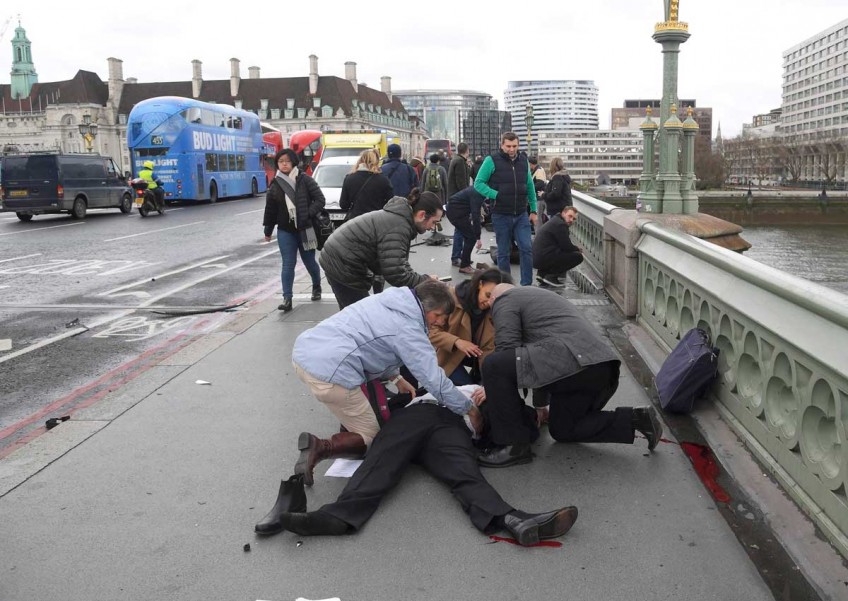 Injured people are assisted after an incident on Westminster Bridge in London, March 22, 2017.
Reuters

Paris - World leaders unanimously condemned the attack in the heart of London by a man who was shot dead by armed police, with many saying they stand with Britain.

At least four people were killed and more than 40 injured in the attack outside parliament Wednesday when a man mowed down pedestrians with a car then leapt out and stabbed a police officer.

In an address outside her Downing Street office, Prime Minister Theresa May described the attack as "sick and depraved" saying the assailant chose the site as an assault on Britain's democratic values.

Chancellor Angela Merkel said Germany stood "firmly and resolutely alongside Britons in the struggle against all forms of terrorism" while President Frank-Walter Steinmeier added: "In these grave moments, we Germans feel very close to the British people." .

President Francois Hollande sent a message of "solidarity" and "support to the British people" saying France could identify with their pain after the attack, in which three French high school students were also wounded.

"France, which has been hit so hard in recent times, knows what the British people are suffering today," he said.

And Prime Minister Bernard Cazeneuve tweeted: "Solidarity with our British friends, horribly attacked, full support for the injured French students, their families and their friends." .

The White House condemned the attack and pledged "the full support of the US government in responding to the attack and bringing those to justice who are responsible," spokesman Sean Spicer said at a briefing.

Canadian Prime Minister Justin Trudeau tweeted: "Our thoughts are with the victims of today's attack in London and their families. Canadians remain united with the people of the UK. " .

In Brussels to commemorate the one-year anniversary of attacks on the main airport and a metro station, Juncker said "the fact that exactly on the same day something similar happened in London, and to London, is really putting me in the situation of someone who does not have... enough words to express how I am deeply feeling."

European Council President Donald Tusk tweeted: "My thoughts are with the victims of the Westminster attack. Europe stands firm with the UK against terror and ready to help".

"We consider it an evil to which it is necessary to fight collectively. In this moment, as always, our hearts are with Britons and we share their pain".

Prime Minister Mark Rutte told Dutch television he was shocked by the "horrific" news and said: "The city is in our hearts. We are following the situation closely, and are in contact with the British authorities." .

Italian Prime Minister Paolo Gentiloni, who observed a moment of silence at the start of a meeting with Social Democratic lawmakers, expressed his "condolences" and said: "Italy and the United Kingdom remain side-by-side in our condemnation and firm response to all forms of terrorism".

"Our condolences are with those who mourn and all who are affected in London," Prime Minister Charles Michel tweeted. "Belgium stands with UK in fight against terror." .

Turkish President Recep Tayyip Erdogan emphasised that "Turkey feels and shares deeply in the United Kingdom's pain" and that it stood in "solidarity" with Britain "in the fight against terrorism".

Erdogan had earlier warned Europeans in a speech on Wednesday that "no European, no Westerner will be able to take steps on the street safely and peacefully," as a crisis between Ankara and the EU showed no signs of abating.

Turkish Prime Minister Binali Yildirim called terrorism "a global catastrophe" on Turkish television, adding: "All countries should come together on the terror issue and fight together against" it.

Spanish Prime Minister Mariano Rajoy tweeted: "Spain stands with the British people. I condemn the attack in the vicinity of Westminster, London. Solidarity with the victims." .

"This attack clearly shows the priorities on which Europe must concentrate. It's only when we are united that we have the capacity to face these threats," said Portugal's Prime Minister Antonio Costa.

Australian Prime Minister Malcolm Turnbull said the assault was an attack on "freedom and democracy everywhere".

Qatar stressed its rejection of violence "in all its forms" and its support for the UK government "in all the measures it takes to maintain the country's security." .

Venezuela's socialist President Nicolas Maduro expressed "full support for the people of London and our absolute rejection of all forms of terrorism." "Enough terrorism, enough war, enough violence. We condemn terrorism in all its forms and support the victims and their families," he said in televised comments.